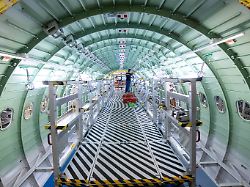 The low-cost airline Cebu Pacific is one of the youngest fleets in the world – and the Philippine company expands. 16 new Airbus aircraft are expected to be launched by 2024. The European aircraft manufacturer is expected to contribute billions of euros.
The European aircraft manufacturer Airbus has received a major order from the Philippine airline Cebu Pacific: The low-cost airline ordered 16 machines of the type A330neo, as the company announced. The catalog value of the order is therefore 4.8 billion dollars (4.3 billion euros). Airbus 131,26 With the large order, the largest Philippine low-cost airline wants to renew its fleet and push through the more efficient machines, the cost per passenger. The delivery of the aircraft is scheduled for the years 2021 to 2024. Overall, the Philippine airline operates 74 aircraft, most of them Airbus. Cebu Pacific recruits one of the youngest fleets in the world. For the past year, the airline recorded an increase in passenger numbers of about three percent year on year to 20 million passengers. For Airbus, it is another major order from Asia. Just last week Indian airline IndiGo announced the order for 300 A320 neo aircraft; the business has a catalog value of at least 33 billion US Dollar.Airbus vies world-wide with the US competitor Boeing for market shares. Boeing is in a deep crisis after two aircraft accidents with the machine type 737 MAX.