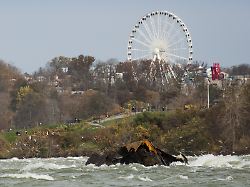 And it's moving: A stuck for more than 100 years near Niagara Falls boat drives towards the abyss. A storm has solved the wreck, which is known to tourists as "Iron Scow".
For over a hundred years, a boat is stuck in front of the Niagara Falls – now it could fall: After a storm, the tourist known as "Iron Scow" (iron barge) has wrecked about 50 meters to the abyss. "It looks like it has toppled over and turned around," said Jim Hill of the Niagara Park Administration. The boat was demolished in 1918 by a tug and then drifted down the river. About 600 meters before the Horseshoe Falls on the Canadian side, it was then stuck between the rocks. Only last Thursday, in the Halloweennacht, it has moved again. The administration of Niagara Falls keep the boat now with the help of video cameras in the eye, reported the TV channel CBS. At its current location it is now stuck again, said Hill the transmitter. Whether it takes days or years to move on to the waterfall is uncertain.