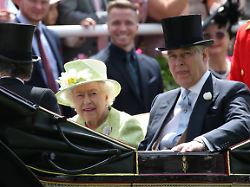 Prince Andrew is currently under tremendous pressure. The second-oldest son of the British queen has to undergo much criticism for his connection to the Epstein scandal and a failed interview. Now, Queen Elizabeth is celebrating his birthday party.
British Queen Elizabeth II has canceled the birthday party she had planned for Prince Andrew and his charities. Instead, the monarch wanted to celebrate the 60th birthday of her son, who was heavily criticized, for a small family dinner, according to the Sunday Times. Prince Andrew is celebrating his birthday on February 19th. Previously, the Sunday Times had also reported that Andrew plans to give up his post as patron of numerous charities. More and more sponsors have already withdrawn their funding for projects that Andrew supports as patron. On Wednesday, the prince had announced his duties to rest for the royal family and promised to "help all the investigative authorities." At the same time, Queen Elizabeth II had last seen riding with her second eldest son. As seen in photos in the British press, the 93-year-old monarch was escorted by Andrew on Friday leaving the sprawling castle grounds in Windsor near London. The Queen is considered a horse lover who still climbs several times a week in the saddle. The joint ride is likely to be interpreted as a statement of solidarity. The Buckingham Palace did not want to comment on that. Epstein connection weighs on AndrewAndrew is currently in the focus of the media because of his connection to the late US businessman Jeffrey Epstein. The multi-millionaire Epstein had committed suicide in a New York prison in early August. He was accused of abusing and forcing dozens of minors into prostitution. Andrew was friends with Epstein for many years and stayed at his home. One of the victims, Virginia Giuffre, claims she was forced into sex with the Royal several times. Andrew denies that and does not want to hear about the machinations of his former friend. In a BBC interview aired last weekend, he tried to justify himself. But the shot went backwards. His explanations were widely perceived as untrustworthy. He was also accused of not expressing sympathy for the Epstein victims.