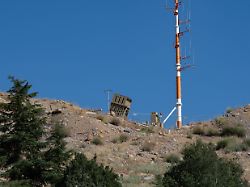 Israel reacts to the rocket fire from Syria on the night of Tuesday with air raids. Around Damascus there should have been several explosions.
The Israeli Air Force reportedly attacked a number of targets in Syria on Wednesday night. On Twitter, Israeli forces reported "broad-based attacks" on positions of the Syrian army and forces associated with Iran. Israel responded to rocket attacks from Syria from night to Tuesday, it said. At the same time, the Israel Defense Forces (IDF) sent a sharp warning to the Syrian government. "We consider the Syrian regime responsible for all actions that emanate from Syria and warn against further attacks against Israel," tweeted the IDF. "We will continue resolutely and for as long as necessary against Iranian roots in Syria." Syrian media had reported a series of explosions around Damascus during the night of Wednesday. According to this information, the Syrian air defense bombarded and hit "several targets". On the other hand, the Israeli side said that the Syrian air defense had fired a missile despite the previous warning, in response to which several Syrian air defense units had been destroyed. The information could not be verified independently. Only on the night of Tuesday had there been explosions near the airport in the capital Damascus. Further details were not mentioned by the state agency Sana. The Syrian Observatory for Human Rights reported that Israel's army had fired five rockets at the south of Damascus. Some were intercepted. After that, the Israeli defense system Iron Dome caught several missiles fired from Syria. The Israeli Air Force has repeatedly attacked targets in Syria in the past. According to observers, the bombing is directed against Iranian forces. Israel wants to prevent its archenemy from expanding its influence in Syria militarily. Iran supports the government troops in the Syrian civil war.