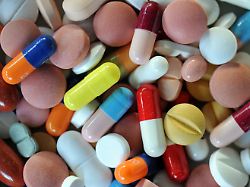 According to a secret letter, the British are running out of medicines – among the substances concerned are also vital medicines. The remaining drugs should now be rationed and divided. But that is far from easy.
There is a shortage of important medicines in the UK healthcare system NHS. The Guardian, citing internal documents, reports that 17 medicines are in short supply – including vital drugs for cancer, Parkinson's, mental illness or eye disease. Procurement also causes difficulties for 69 other drugs. These include anti-tuberculosis antibiotics, hepatitis vaccines, and epilepsy and heart disease drugs. It's not the first time that drugs are in short supply in the UK – but the scope and range now cited doctors as "unprecedented" for the Guardian "and" alarming ". Apparently, the information from the NHS was not intended for the public. "This information is confidential to the NHS, please do not upload it to public websites," reads the document. The letter recommends rationing and distributing vital medications and prioritizing the patients they need. For example, for the Parkinson's drug Procyclidine, which is out of stock until March 2020, it is advised that the remaining stock be split up locally with the help of the regional procurement manager. At the same time it is proposed to halve higher-dose tablets such as the migraine drug Relpax – although it is admitted that there is no data on what happens when the tablets are divided. Switching patients from one drug to another may require increased clinical monitoring in some cases, the report warns. Because often patients are prepared for a particular drug and tolerate another, similar means worse. According to a spokeswoman for the Royal Phramaceutical Society, the lack of medication has different backgrounds. So there are problems in the production of some drugs. But global demand and a fluctuating exchange rate also play a role.