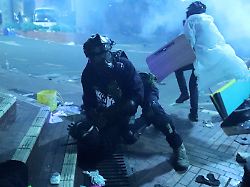 Molotov cocktails and arrows on police officers, water cannons against protesters: Especially around the occupied Polytechnic College rocks the situation dangerously high. The police warn against the use of sharp weapons, the protesters are erecting burning barricades.
In Hong Kong, the most violent clashes in the past five months continue on Monday. In addition to attacks on the police with bows and arrows, the demonstrators also threw Molotov cocktails and incendiary bombs. The police used water cannons with a skin-irritating agent and tear gas. According to the law enforcement, a policeman was hit by an arrow in the leg on Sunday and taken to the hospital. Many demonstrators wore gas masks or cloths over their mouths and noses to protect themselves from tear gas clouds. Some stripped down to their underwear after being soaked by a water cannon whose water, according to eyewitnesses, contained an irritant. An armored police vehicle burned by gasoline bombs at Sunday's riots was towed early Monday. University as a fortress fire outside Hong Kong Polytechnic University. (Photo: REUTERS) One of the main focuses is still the Polytechnic University in the financial metropolis – the last of the five universities in the city, whose campus is still occupied. According to eyewitnesses, the university looks like a fortress. As the police approached the university's barricaded entrance gate in the morning hours (local time), the protesters retreated to the campus and set fire to the gate and pedestrian bridge. In the hustle and bustle of the riots, some demonstrators wanted to leave the building, others reinforced the barricades and positioned boxes of petrol bombs around the complex. Thousands of residents and protesters flocked overnight to various districts around the university to penetrate the ranks of the riot police and rescue the trapped students. The police in the former British Crown Colony spoke of increasing rioting. Police warned that the demonstrators were pushing for more freedom one. The police are very violent, said a 23-year-old to Reuters. "The demonstrators responded only to the police." He was ready to go to prison for his beliefs. Those who fired arrows would only defend themselves. Another student said, "We are not afraid." If the fight does not continue, the protest movement will fail. In the statement, the police warned the demonstrators not to use deadly weapons against the police and stop further violence. The officials would otherwise react with counter-violence and, if necessary, use live ammunition. The civil rights activist Joshua Wong has defended the use of force by the demonstrators in Hong Kong. "With purely peaceful protest, we will not reach our goal," Wong told the "Süddeutsche Zeitung". But we do not need violence either, we need both. "Since June, tens of thousands of people have been demonstrating for democracy and against the government of the Chinese Special Administrative Region, which accuse them of being too close to the leadership in Beijing. The initially peaceful protests became more and more violent – on both sides.