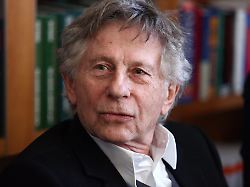 Roman Polanski's new film, "I complain," has apparently torn up old wounds in a French actress. She accuses the director of violently raping her in his chalet in 1975. The denies the allegations again vehemently.
The French actress Valentine Monnier raises serious allegations against director Roman Polanski. She told the French newspaper "Le Parisien" that the director allegedly raped her in 1975 in his chalet in Gstaad (Switzerland). At the time, Monnier was 18 years old. The newspaper also reports some witnesses who have confirmed that Monnier told them about the incident back then. When she returned to the chalet after skiing with a friend, Polanski called her to his room. When she reached the top, he was already waiting for her naked. "He beat me until I gave up and then raped me," says Monnier. After that he started to cry and apologized to her. An acquaintance Polanskis told the newspaper that she had sought refuge with him after the rape. He asked Monnier if she wanted to go to the police, "but she was so shocked that she did not know what to do." "Memory does not fade." "Rape is a time bomb," quotes "Le Parisien" Monnier. "The memory does not fade, it's like a spirit that persecutes you and treacherously changes you." The actress also stated that Polanski's new movie "J'Accuse" ("I'm lamenting") has made her go public. Polanski, meanwhile, vehemently rejects the new allegations, as his lawyer Herve Temime said "Le Parisien". It's not the first allegations against the 86-year-old. In America, a lawsuit against him has been going on for more than four decades. He is said to have had sex with a 13-year-old in 1977. Polanski then fled America and has not returned to this day. The US continues to demand the extradition of the director. His alleged victim from back then has publicly stated that the US authorities should drop the charges. Two years ago, former German actress Renate Langer filed a complaint against the director. He is said to have raped her in 1972, also in his chalet in Gstaad, after she applied for a film role. He then apologized to her and gave her a small role in his movie "What?" offered. Langer accepted the role. These reproaches Polanski rejects.