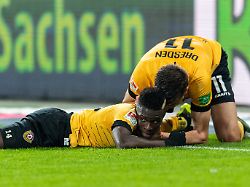 There are news from the table cellar of the second Bundesliga: The SG Dynamo Dresden beats the SV Wehen Wiesbaden and leaves the last place. However, the guests by video ticket with curious reason a goal is denied. At the Millerntor St. Pauli and Bochum share the points.
SG Dynamo Dresden – SV Wehen Wiesbaden 1: 0 (1: 0) Dresden has left the table end of the second Bundesliga with a redemptive victory. The SG Dynamo defeated the SV Wehen Wiesbaden after seven games without success with 1-0 (1: 0) and displaced the promoted to last place. In the Rudolf Harbig Stadium, another curiosity of video evidence occurred in front of 25,444 spectators. Dynamo held in the attack on the Wehener Auslinie the ball in the game. 100 meters away and ten seconds later met Manuel Schäffler to 0: 1 in the 26th Minute.Dder also not: The ball had been in the attack Dresden but in the end. Referee Martin Petersen took back the Wiesbadener goal. Fifteen minutes later, Dynamo took his first chance (41 ') through Alexander Jeremejeff. Immediately thereafter, there was a game interruption, in addition to Wehens goalkeeper Lukas Watkowiak a banger had exploded. Watkowiak was able to continue playing and parried against Moussa Kone (53.), who had finished much too unplaced. It was not enough for a turnaround in Wehen.FC St. Pauli – VfL Bochum 1: 1 (1: 1) Football at Millerntor: In the end there was a point for both teams. (Photo: imago images / Revierfoto) FC St. Pauli has continued its sporting stalemate. Against Hamburg VfL Bochum had to be content despite a superior led game with a 1: 1 (1: 1) and remained so in the fifth league match in series without victory. In front of 29,546 spectators in the again sold-out Millerntor Stadium Simon Zoller took the guests in the lead (5th), which equalized the strong Waldemar Sobota (10th). In the varied from the beginning match St. Pauli had the first big chance when Sobota ( 4.) hit the post. In return, it made Zoller better, who dusted off after a defense from goalkeeper Robin Himmelmann to the lead. The held but only five minutes, because Sobota aimed more precisely at his second shot on goal. Leo Östigard (33rd) missed the best chance for the St. Pauli lead before the break. After the change, the hosts determined the match, but the strong VfL goalkeeper Manuel Riemann prevented Viktor Gyokeres (63) and Dimitrios Diamantakas (67) the lead. The VfL, however, did in the second half too little for the offensive and seemed to be satisfied with the partial success.