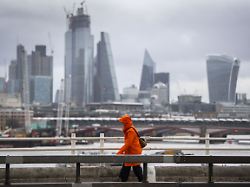 Will the new elections in London bring the hoped-for breakthrough in the Brexit debate? The credit rating agencies of the US rating agency Moody's are skeptical about the British political perspectives. The view sinks, the classification wobbles.
Rating agency Moody's downgraded the rating outlook for the UK from "stable" to "negative" in view of the planned EU exit from the UK. A downgrade in the coming weeks is therefore possible – and in the case of another Brexit hanging game even probable. Because the analysts of the US credit rating monitor in their justification expressly referred to the uncertainty and paralysis of the country by the impending Brexit and a probable deterioration of economic power. As a trading nation, the United Kingdom depends on the smooth flow of imports and exports. The country's most important trading partner is the European Union. In terms of credit rating, Britain is initially rated "AA2", Moody's said. This will allow the London Government to continue to provide fresh credit with a top-rated rating on the capital market. In the event of a downgrade, the previously undisputed market position could wiggle. There are plausible reasons for a revaluation. For almost three and a half years, the country has been looking for a solution to how the result of the referendum of 2016 can be implemented and Britain can leave the European Union. Opponents of the EU's exit fear chaotic conditions, should it in fact come to an unregulated exit without contractual arrangements at all levels. Britain is in the coming weeks politically important to set the course: Prime Minister Boris Johnson has in the election campaign, the withdrawal of his country from the European Union January assured. His Brexit agreement with the EU had not found a majority in the MEPs. The lower house forced him to extend the Brexit deadline from October 31 to January 31. By early elections, the blockade in the Brexit process to be solved werden.Die parliamentary elections will take place later this year: On December 12, the British to vote and thus create new majorities in the British lower house.