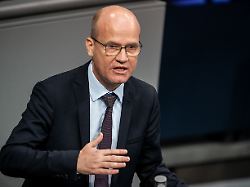 For months SPD and Union argue about the structure of the basic pension. But they will not agree – on the contrary. The fronts are hardening: After a burst peak meeting Union leader Brinkhaus issued a solution without means test now a clear rejection.
In the dispute of the governing coalition over the basic pension union leader Ralph Brinkhaus has excluded a solution without means test. "That will not work with us," said the CDU politician of the "world" (Monday edition). "We do not want to distribute tax money to people who do not need the support." His group is not ready to "throw the principles of the pension and the basic system over the pile," said Brinkhaus the newspaper. "To the very bottom of the workforce," he feels, "that people do not understand when people get extra money from the state, even though they do not need it." Also from the ranks of young CDU deputies, the critical voices in a basic pension compromise without neediness test louder. The Hamburg CDU politician Christoph Ploss told the newspapers of the Funke media group (Monday editions), he expected of CDU chief Annegret Kramp-Karrenbauer, "that it makes it clear to the SPD that can not make a departure from the coalition agreement with the CDU". The agreement on the basic pension provided for in the coalition agreement was already a compromise, he emphasized. Top meeting surprisingly postponed Baden-Wuerttemberg member of the CDU Felix Schreiner called a solution in the basic pension without neediness solution "termination of the intergenerational contract". "It can not be that in the end benefit those who do not need it and have other income," said the 33-year-old the newspapers of the Funke Mediengruppe.SPD and Union have been arguing for months about the structure of the basic pension. There is agreement that all those who have 35 years of contributions have a pension ten percent above the basic security. That was also agreed in the coalition agreement. But who exactly should receive the pension supplement? The Union insists on the test of actual need agreed in the coalition agreement, which the SPD rejects. Actually, a peak meeting was scheduled for Monday evening, which should bring a final agreement. This peak meeting was surprisingly postponed on Sunday. It should now take place on November 10th. Both sides justified the postponement with the need for further clarification. As a compromise line, a solution had been found over the weekend, according to which the payment of the basic pension would be made dependent on the pensioners' income and not on a means test involving all assets , On the other hand, there was resistance in the Union faction.