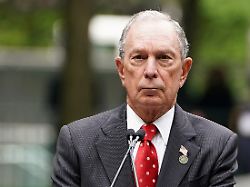 Now it's official: The billionaire Michael Bloomberg wants to compete for the US Democrats in the presidential election next year. First, he faces the primaries in Alabama. His biggest competitor is calm.
At the last minute, former mayor Michael Bloomberg of New York has created the formal requirements for a presidential candidacy for the US Democrats. The 77-year-old media entrepreneur submitted the documents for a candidacy for the Democratic primary in Alabama. The favorite among Democratic presidential candidates, ex-vice-president Joe Biden, was in the face of Bloomberg's possible candidacy calm and pointed to his lead in polls. Shortly before the deadline, Bloomberg's name suddenly appeared on the Democrats' website in Alabama's list of candidates. With his registration, Bloomberg has the opportunity to enter the Democratic presidential race. Several media, including the New York Times and CNN, have previously reported that Bloomberg is considering a candidacy. The ex-mayor believes that Democrats' favorites Biden and Senator Elizabeth Warren could not win against US President Donald Trump, quoted the New York Post in his circle. The Bloomberg news agency, whose boss is the ex-mayor of New York, cited a billionaire confidant with this view. In March, the 77-year-old, who was mayor of New York from 2001 to 2013, was still excluded from running for office in the US presidential election in 2020. Trump blames Experts see Bloomberg's potential candidacy as a threat to Biden. Both the ex-vice president and Bloomberg are politically centered, while Senators Warren and Bernie Sanders, who are hot on the heels of Biden, hold left-wing positions. Nevertheless, Biden was calm. He had "no problem" with Bloomberg throwing his hat in the ring, he said in Concord, New Hampshire. He is ahead in the polls. "If I'm not mistaken, it looks good to me, both in relation to Trump and in relation to all candidates," Biden said. The expert Jason Mollica of the American University pointed out that Biden's election campaign had recently been weakened. "Should Bloomberg receive the support of Centrists in the Democratic Party, it would send a clear message to Biden that the party does not consider him the right candidate," Mollica said. Trump was confident of victory over Bloomberg's possible candidacy. "Little Michael will fail," the president said, looking at the size of the entrepreneur. Bloomberg does not have "the magic to do well". With an estimated fortune of $ 55.5 billion (just under € 50 billion), Bloomberg is the "ninth richest man in the world," according to Forbes magazine. He was both a member of the Republicans and the Democratic Party and as mayor without party. He is committed to, among other things, the fight against climate change and health policy issues. The 77-year-old is considered moderate, close to the financial world and has never made a secret of the fact that he is being left to the economic policy measures demanded by presidential candidates Bernie Sanders and Warren.