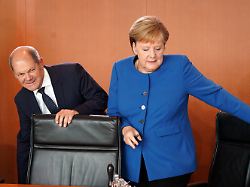 If there is no shortage of anything in Berlin, it is a hymn to the Grand Coalition. However, in the eagerly awaited interim results, the government members are working with Verve. The signs are set to continue.
The grand coalition wants to continue governing until 2021, according to a media report in their current lineup. This is from an 83-page report on the mid-term review of the federal government, the newspapers report the Funke media group. The grand coalition has "achieved and implemented a great deal, but there is still much to be done," reads: "We live in a time when the political and social centrifugal forces are increasing, the balancing of different interests and the indispensable in a democracy A willingness to compromise is loosing acceptance, "the report said. Whether the lack of willingness to compromise also referred to the controversial ground between the Union and the SPD remained open in the mid-term review, as the newspapers reported to the Funke media group. Under the rubric "What are we going to do", the government refers only to the coalition contract, which recognizes the life benefits of pensioners who worked for 35 years and paid contributions, raised children or looked after relatives with a basic pension. For months, a dispute between the Union and SPD smoldering, whether there should be a means test before the grant. Chancellor Angela Merkel now campaigned urgently for the result of the coalition-comprehensive working group on the basic pension. This is a good basis for a sustainable compromise of the coalition committee next Sunday, Merkel made clear on Tuesday in a meeting of the Union faction, according to participants. If this template is properly coordinated by the coalition leaders, there will be a circle of respondents where 99 percent could say that it concerns the right ones. There was a needs test based on what the Union had in mind. Help for indebted communities The report also indicated that the federal government wanted more support from over-indebted communities. Federal Finance Minister Olaf Scholz is already in talks with the Bundestag, Länder and local authorities. Indebted municipalities would be helped with old debts, if there is a "political consensus to help the municipalities once purposefully" – such a consensus presuppose that thereafter it does not come to a renewed indebtedness. According to information from the Funke Mediengruppe, the Federal Government also aims to achieve full employment despite the weakening economy. "The number of unemployed in Germany is as low as it has not been for a long time – and yet there are still too many long-term unemployed, for whom we have started special labor market integration programs," the government cites. In principle, Union and SPD already had the mid-term review two years ago at the reissue of their coalition. They want to check which agreements have been implemented from the coalition agreement and which are not. Especially the SPD, in which the coalition with CDU / CSU is controversial, had come to this conclusion. On the basis of the balance sheet, the coalition parties want to discuss the continuation of the government alliance.