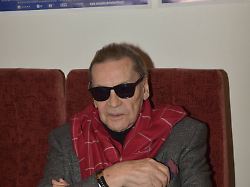 In the sixties and seventies Helmut Berger becomes a celebrated star with roles in "The Portrait of Dorian Gray" or "The Damned". Because of health problems, the 75-year-old retires now from show business.
Helmut Berger withdraws "from now on from the public back". This was confirmed by his management. His agent further informs that the Austrian acting legend thanks her "many fans for the loyalty that has lasted for decades, which fulfills him with great humility". "I danced at every party and now it's time to say goodbye and enjoy my retirement with a last drink in my hand," Berger told the "Bild" newspaper. Berger, who was once named "the most beautiful man in the world" by "Vogue", was released from hospital just this week. Fortunately, his condition seems to have stabilized. "Mr. Berger is doing well," as his management continues to tell. "He has had several lung infections in the past few months, from which he has recovered, which makes us all very happy." The 75-year-old was in the sixties and seventies with roles in "Ludwig II", "The Portrait of Dorian Gray" or "The Damned" of the biggest movie stars in Europe. His extravagant jet set life and reputation as Enfant Terrible made him a welcome guest on every talk show. That's enough of that.