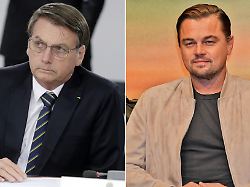 Between August 2018 and July 2019, nearly 10,000 square kilometers of forest will be destroyed in Brazil. President Bolsonaro believes that non-profit organizations have put the fires. He sees a main responsible in Oscar winner Leonardo DiCaprio.
The destruction of the rainforest in the Brazilian Amazon is progressing as fast as it did more than ten years ago. According to Brazilian President Jair Bolsonaro, Hollywood superstar Leonardo DiCaprio is to blame for the devastating fires in the Amazon region. "DiCaprio is a cool guy, is not he? He donates money to set the Amazon on fire," Bolsonaro told his supporters at an event, according to the Hollywood Reporter. The ultra-right Bolsonaro alludes to the $ 5 million donations that DiCaprio has donated to nonprofit organizations through its Earth Alliance foundation. The aid is intended to combat the consequences of the fires. Golsonaro accuses these nonprofit organizations of having set the fires themselves in order to receive donations. The Brazilian police had previously searched NGO's office premises for this suspicion. Also, several volunteers were arrested, interrogated and later released. Bolsonaros' environmental policy has received international criticism since the fires. The 64-year-old sees great economic potential in the Amazon and wants to open up large areas of it for agriculture or mining. His critics accuse Bolsonaro of encouraging massive deforestation and deforestation.