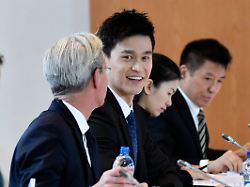 Poor translations characterize the hearing of swimming star Sun Yang at the sports court. The Chinese interpreters are obviously overwhelmed. Sun is said to have instructed to have a doping sample destroyed with a hammer. If he is convicted, threatens him a long lock.
Swimmer-star Sun Yang appeared in a black suit with a blue tie and looked extremely respectable, but the "hammer affair" for the Olympic champion continues to provide curiosities. At the hearing before the International Court of Justice CAS, there were serious problems in understanding the Chinese translators. "The interpreter has not translated, Sun understands nothing," shouted the lawyer of the three-time Olympic champion during the hearing. Among other things, "200 milliliters of blood" instead of "200 times" translated, there was a lot of confusion. The chairman of the three-member jury then apologized on behalf of CAS for the faulty translation. Allegedly, Sun Yang is said to have brought the obviously overburdened translators, but even his own. Clear and understandable, however, came over that the multiple world champion rejected the charges against him in the spectacular doping affair. When doping controllers visited Sun's property on the night of September 5, 2018, a dispute arose, culminating in a gag-smashed doping sample. The inspectors "were not able to show me the documents that prove their identity, so I could not allow them to take a sample of me," the 27-year-old told CAS at one of the rare public hearings "If they had been professional and expelled, we would not be here today," Sun Yang said. Sun had previously defended itself in social networks, the public had been "misinformed," it said, the facts were "distorted." The Chinese swimming federation spoke of "fake news". Sun threatens up to eight years lock issue of a report of the world federation Fina it to the evening in Suns property in the Chinese province Zhejiang to have arrived turbulent, after all Sun Yang at least one blood, but no urine sample delivered. However, a guard later smashed the container of the blood sample with a hammer, Sun had stood next to it and donated light with the flashlight function of his cell phone. Wada representative Richard Young strongly supported this presentation. "The doping controller wanted to leave the house with the blood sample," he said, "Sun Yang and his entourage made it clear: Under no circumstances will the controller do that." Asia's flagship swimmer is all about a lot. If he does not convince the tribunal, threatens him as a repeat offender a doping ban of up to eight years. He had already been suspended for doping for three months in 2014. The World Federation Fina, which is criticized for its lax anti-doping policy, Sun had acquitted Sun at a hearing in January with the curious reason that you will probably "never know" the truth. The Wada, however, filed an objection, so it came now to the CAS appointment. A decision is expected later – possibly only in the coming year – for the competitors, the Chinese, the first swimmer in World Championships and Olympic Games all disciplines won 200-1500 m freestyle, anyway a red scarf. At the previous World Cup, competitors denied Sun the handshake and the winning photo at the award ceremony, Sun then roared one of the protesters. No translator was needed for that.