Menu
Home > news > E-motorcycle in the style of the 650: Kawasaki tinkers at the E-Ninja 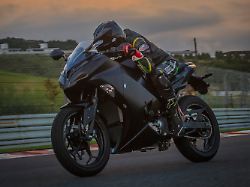 At the EICMA motorcycle show, Kawasaki presented its first e-bike in the format of a Ninja 650. Only a prototype was shown, but soon a production model with a range of 219 kilometers should follow.
The E-Kawa should be able to charge fast with DC or alternatively slowly with alternating current. (Photo: Kawasaki) At the EICMA motorcycle show in early November, Kawasaki reaffirmed his ambition to launch an e-bike on the market in the near future with a chassis. This was a ready to drive electric motorcycle in the format of a Ninja 650, but missing the trim parts and a seat. Accordingly, the prototype released the view of the drive technology stuck in a lattice frame, about which, however, little was revealed. Central in the frame is a powerful block to recognize, which should include battery, power electronics and charging technology. Underneath are the engine and the four-speed gearbox, which feeds power to the rear wheel via a chain. The packaging suggests that the production version already available in the near future will look very similar to a conventionally powered motorcycle. So the top panel is likely to stretch like a tank over the battery and power electronics package. Under the battery are engine and a four-speed gearbox. (Photo: Kawasaki) A photo published by Kawasaki shows a flap in this tank dummy, behind which are hidden the charging cable connections. In addition to stronger direct current by Chademo standard, the ready to ride 219 kilograms bike also AC power from the socket. To drive the Japanese have revealed details: He should provide in the top 27 hp and when gliding 13.5 hp. The range will be around 100 kilometers.