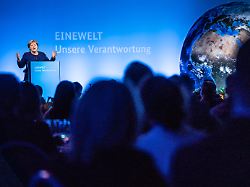 "We still use more than 30 percent more resources than the planet can regenerate." Chancellor Angela Merkel calls for more global community involvement in climate protection. It's about nothing less than a livable future.
Chancellor Angela Merkel has called for increased global efforts to protect the climate. "With the world's climate change targets today, the Earth would warm up by three degrees," Merkel said at the event "One World – Our Responsibility," with which the Development Ministry launched a campaign for sustainable development. "That means that we are still far from where we have to go with our objectives," said Merkel. The industrialized countries consumed 80 percent of the world's resources, 80 percent of the world's resources, Merkel said. That's why there is a special responsibility. The goal of EU Commission President Ursula von der Leyen is therefore right to make Europe the first climate-neutral continent on earth. Merkel pointed to Germany's increasing investment in international climate protection, which would amount to four billion euros in 2020. For a livable and decent future, there must be a profound "change in the present", said Merkel. "We still use more than 30 percent more resources than the planet can regenerate," she said. "Preventing climate change and mitigating its consequences is a vital issue." Politicians, economists, academics, and civil society representatives shared the event on how Germany can assume global responsibility. Already, 20 million people would have to flee from the drought regions of Africa, according to the ministry. At the same time, the world population continues to grow: Experts predict that tens of billions of people around the world will be in the world by 2050. "That's past the problem" Development Minister Gerd Müller warned against the consequences of population growth. "Munich once a week, New York every single month, Germany once a year," he said, trying to set the pace. There are currently about 7.7 billion people in the world. "Either we build the future together and act now or there is no future," he said, referring to a Pope quote. Necessary technological progress, a change of behavior in growth and unscrupulous consumption and a just globalization. A special challenge is the African continent. Merkel, however, described demands as wrong, as far as possible to use the entire funds for climate protection instead of Germany in Africa, for example. "This is past the problem," said the CDU politician. Industrialized countries need to prove, with the development of new technologies and changing behavior, that they can live in prosperity as well as sustainable. Global development programs also need to ensure that women also have access to resources. "Women are a key factor in this process," she said. In many cases, these resources have also been more responsibly used. With the 2030 Agenda for Sustainable Development adopted at a UN summit in 2015, the international community expresses its conviction that global challenges can only be solved together. The centerpiece is a catalog with 17 goals for sustainable development. The commitment of the Paris Climate Change Conference stipulates that states want to limit global warming to a maximum of 1.5 degrees. Experts fear that warming will also have serious consequences for life on earth.