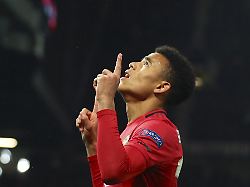 While after four matchdays of the group stage of the Europa League no German team has qualified for the round of the last 32, already solve the first secret favorites on the title of the intermediate round ticket. There are also Kantersiege.
Manchester United, record winners FC Sevilla, Celtic Glasgow, FC Basel and Espanyol Barcelona have prematurely solved their ticket for the second round in the Europa League. English champions ManUnited prevailed against Partizan Belgrade 3-0 (2-0) and can not be replaced in Group L due to the direct duel with the Serbs won from the first two places. For the Red Devils scored the 18th -year-old Mason Greenwood (22nd), Anthony Martial (33rd) and Marcus Rashford (49th). United is at the top of the table with ten points and a goal difference of 5: 0. Record winner trumps on Sevilla qualified with a white vest for the second round of the top 32 teams. Former Spanish national coach Julen Lopetegui's side celebrated their fourth victory in Group A's fourth Group A game with a 5: 2 (4-0) win over F91 Dudelange from Luxembourg. Munir El Haddadi (27., 33., 67.) came in threes and Munas Dabbur (17., 36 ') hit the ball for the Andalusians. Coach Thomas Doll won the second match with Apoel Nikosia thanks to a late strike by Nicholas Ioannou ( 88th) against Qarabag Agdam still with 2: 1 (0: 1). Nicosia (4 points) moved up to second place, just ahead of Qarabag (4) and Dudelange (3). Scottish power in round of the last 32 Celtics Ajer and Lazios Immobile: Glasgow triggers intermediate round ticket. (Photo: picture alliance / dpa) Scottish champions FC Celtic are also planning a 2-1 (1-1) win at Lazio Rome thanks to a last-minute goal from Olivier Ntcham (90 '+ 5'). Ciro Immobile (7) had the Italians in the lead, James Forrest (38) succeeded in the meantime compensation. Celtic (10) are leading group E undefeated, while CFR Cluj (9) has scored one point in the remaining two games to stay in front of the Romans (3). FC Basel are also allowed to winter internationally. The runner-up from Switzerland prevailed against Getafe 2-1 (1: 1) and can no longer out of the top two in Group C with four points ahead of the Spaniard and the Russian representative FK Krasnodar due to the direct duels Six Espanyol goals Espanyol Barcelona secured their ticket in Group H with a 6-0 (3-0) against Ludogorets Razgrad. The Bulgarians had already seen the red card twice after 35 minutes. The PSV Eindhoven missed in Group D, however, the chance of getting ahead early. The Dutch runner-up had lost despite an early penalty (5th) of the former Stuttgart and Leverkusen professionals Daniel Schwaab in the Austrian runner-up LASK with 1: 4 (1: 0). PSV (7) slipped to third behind the team of coach Valerien Ismael and leaders Sporting (9).