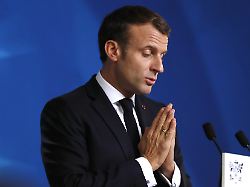 With drastic words, France's President Macron certifies NATO's defense alliance. There is no coordination with the USA, Turkey is behaving "aggressively". Macron sees Europe as a duty – and criticizes Germany's role in the Eurozone.
French President Emmanuel Macron has certified NATO "brain death". Macron said in an interview with British magazine The Economist, "What we're experiencing right now is Nato brain death." Europe must see itself as a geopolitical power, demanded the French president and criticized at the same time Germany's role in the Eurozone.Macron said there was "no coordination in strategic decisions between the US and its NATO allies." In addition, the NATO country Turkey shows an "uncoordinated, aggressive" approach in an area in which the security interests of all affected. He was referring to the Turkish military offensive against the Kurds in northern Syria. Macron had learned about the withdrawal of the USA from northern Syria, which made the Turkish offensive possible in the first place. Commenting on this, the French President commented on the margins of the EU summit in early October: "I thought that we were in NATO, that the United States and Turkey were in NATO." Germany's role in the eurozone "no longer tenable" His dissatisfaction with the military alliance again expressed Macron and was skeptical about the reliability of NATO in the so-called alliance case. "What will article five mean tomorrow?" Macron asked. Article Five of the Nato Treaty requires Nato partners to assist if one of their members is attacked. At the same time, the French president warned that Europe was facing an abyss. One must understand oneself as a geopolitical power, otherwise one loses control over his fate. He criticized Germany for his role in the Eurozone. That is "not tenable" – one needs "more expansion, more investment", but Germany stick to the black zero. The Germans were "the big winners of the Eurozone" and benefited even from their malfunctions. Macron also said that the rule that EU states should be allowed to borrow no more than three percent of their gross domestic product on new debt prevents the EU from preparing for the future. Macron's remarks come in London a few weeks before the NATO summit in early December. This year, the Alliance celebrates the 70th anniversary of its founding. NATO Secretary General Jens Stoltenberg is visiting Berlin today. Macron will be a guest on Sunday evening for dinner with Federal President Steinmeier.