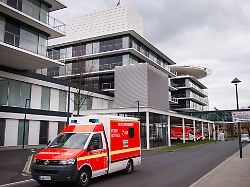 Two young men cause uproar in a Düsseldorf clinic. Their demand for immediate treatment should have been so vehemently enforced that the police had to be called. As the officials move away, the turmoil escalates properly.
In the emergency department of the Dusseldorf University Hospital, several men have disabled the work on the weekend and injured a nurse. Two injured at the age of 19 and 22 years had previously appeared partly covered in blood and had loudly demanded immediate treatment, said a spokesman for the police. One of the men reportedly beat the nurse and slightly injured his arm. The staff had informed the police, who attacked with two patrol cars and calmed the situation, the spokesman said. At that time, the men with three companions had been in the emergency room. When the officials were gone, according to the hospital staff, another 15 people – apparently members of the 19-year-old – should have appeared and behaved loudly and intimidating. They were then referred by a doctor from the hospital. The incident is said to have been preceded by a brawl in front of a club in Dusseldorf, in which one of the two young men is said to have got a bottle against his head. According to police, there were two reports of the injured because of the confrontation in front of the club as well as an ad for trespassing in the clinic.