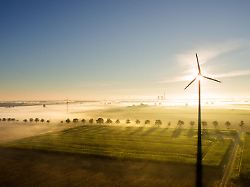 When plans for a new wind turbine are forged, there is often resistance in the population. A stronger financial participation of the municipalities could increase the acceptance however, believes the German town and community federation.
The German Association of Towns and Municipalities has called for a stronger financial participation of municipalities in wind turbines. Affected communities could be involved depending on the size and performance of wind turbines "plannable and direct" to the value added by a special levy, said the CEO of the German Association of Towns and Municipalities, Gerd Landsberg.Zur promotion of wind power is a higher acceptance and use for wind turbines before Place important. "For this we need a clear commitment to the policy of developing wind energy and additional measures to increase the acceptance of municipalities and citizens, one of which may be greater participation of local communities in value creation." The expansion of wind power has almost come to a standstill. The main reasons are long approval procedures, under-reported areas and many lawsuits. On site, there are many citizens' initiatives against wind turbines. The energy industry and environmental organizations fear that the expansion crisis will be further aggravated. Background are plans in the federal government for a nationwide uniform minimum distance of 1000 meters from wind turbines to residential buildings – to increase acceptance on the ground. Countries should be able to deviate from the requirements. According to the draft of the Ministry of Economic Affairs, the minimum distance should already apply to housing estates with more than five houses. But that is controversial in the coalition. There is also criticism that existing blueprints for new wind turbines should only be exempted from the 1000-meter rule if they were made in 2015 or later. A significant part of the planned but not yet implemented projects has older development plans, these could become invalid. Such a planning process could take several years. Distance regulation would slow down wind power. Landsberg said that it was not only fair to make the local communities of renewable energy plants more involved in their added value. "It must also be about using incentives to gain more acceptance and commitment to the energy transition." On the one hand, local communities should receive a value-added share through a new property tax. The Federal Council had also discussed a greater involvement of the local communities of wind and solar power plants in trade tax. "This approach also points in the right direction, but so far it has not been able to reach consensus in the legislative process." A system-specific special levy should also be discussed seriously, Landsberg said. The state of Brandenburg has made a first important intermediate step with its law on the payment of a special tax to communities in the vicinity of wind turbines. "However, this law must be developed further for a federal regulation." According to a study by the German Institute for Economic Research (DIW), stricter minimum distances would significantly slow down the further expansion of wind power on land. Above all, the area potential for wind energy would be greatly reduced, according to the DIW in Berlin. Stricter distance regulations would have already in Bavaria, the wind energy collapse and would be in the Bund to achieve climate targets in Weg.In Bavaria applies a so-called 10-H distance control – therefore, the distance of a wind turbine of housing estates must be at least ten times as far as the plant is high. For example, at a height of 200 meters, that would be two kilometers. However, more space is needed for wind energy to reach the climate targets, not less, according to the co-author of the DIW study, Jan Stede.