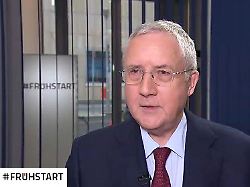 Dramatically falling poll numbers make the CDU hard to deal with shortly before their federal party convention. Many Christian Democrats are of the opinion that Chancellor Merkel's liberal policy is responsible for voter decline. But Forsa boss Güllner offers in the n-tv early start another explanation.
The persistently low poll numbers of the CDU writes Forsa boss Manfred Güllner the misguided course of party boss Annegret Kramp Karrenbauer. "Her main mistake was that she tried to involve the followers of Friedrich Merz by pushing the party to the right," said Güllner in the n-tv Frühstart. "That has the voters from the social and political center bounced." In surveys, the Christian Democrats are currently at about 26 percent. This is 2.5 million CDU voters less than in 2017. Many in the party suspect that they are losing most voters to the AfD, since the liberal course of Chancellor Angela Merkel has created a vacuum on the right margin, said the boss of the polling institute. "That's not true, however, as nearly 40 percent of former CDU voters go to the Greens." Those who joined the AfD were a radical minority of less than ten percent. "This means that the emigrants locate clearly to the left of the CDU root voters," emphasized Güllner. Therefore, Friedrich Merz, one of Kramp-Karrenbauer's strongest competitors, would be unfit for the party leadership, even if he was sitting in front of Minister of Health Jens Spahn and North Rhine-Westphalia's Prime Minister Armin Laschet in the Chancellor's question. "The problem of Merz is that he is the darling of AfD supporters," said Güllner.Doch also Kramp-Karrenbauer only very few citizens dared to be Chancellor. According to the Forsa survey, only 14 percent would vote for them in the event of a direct chancellorship. "It's very hard to get out of such a hole," said the Forsa boss. As CDU chairman alone she will not succeed. "And there is a question mark behind the question of whether you, as Minister of Defense, succeed in such a difficult position."