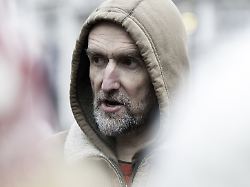 With co-founder of the environmental movement Extinction Rebellion caused a stir with relativizing remarks on the Holocaust. In an interview Hallam called the systematic mass murder as "another shit in human history". The German offshoot reacts immediately.
Excitement around activist Roger Hallam: In an interview with Time, co-founder of the environmental movement Extinction Rebellion downplayed the Holocaust. "The fact is that in our history, millions of people have been regularly killed under dire circumstances," the Briton said in reference to the extermination of the Jews during the Second World War. Genocide has been around for the past 500 years. "To be honest, you could say: this is an almost normal event". For him, the Holocaust is "just another shit in human history." According to Hallam, the systematic mass murder of European Jews in the Federal Republic is overrated. It does not do any good to Germans that they mistakenly consider the Holocaust unique. "The extent of this trauma can paralyze," said the former organic farmer. "That prevents you from learning from it." The German branch of Extinction Rebellion has already responded to the interview and sharply rejected Hallams statements. "We are resolutely distancing ourselves from Roger Hallam's belittling and relativizing remarks on the Holocaust," the movement wrote on Twitter. Hallam has caused quite a stir in the past. In September, in an interview with Spiegel magazine, he called for breaking laws to attract attention. Because he is said to have disturbed the air traffic at London's Heathrow Airport with a drone, he must answer in court in early 2020.Extinction Rebellion is originally from Britain. According to own data the group exists since November 2018 also in Germany. The international movement has set itself the goal of minimizing the risks of climate change and preventing ecological collapse. Among other things, she calls for national governments to immediately declare the climate emergency.