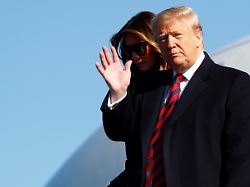 30 years after the fall of the Berlin Wall, US President Trump praises the opening of the border as a lesson to doctrinal powers around the world. No "iron curtain", it is said in an official message from the White House, could withstand the urge for freedom of the people.
On the occasion of the 30th anniversary of the fall of the Berlin Wall, US President Donald Trump has praised the Germans and described the peaceful opening of the border on November 9, 1989 as a historical teaching example. The fate of the Berlin Wall must be a "lesson for repressive regimes and rulers everywhere": "No Iron Curtain can ever hold back the iron will of a people determined to be free," Trump's official message of greeting said White House released on Saturday. "Brave men and women from East and West Germany" would, according to Trump, "joined together" the day just 30 years ago to "tear down a wall" that for more than a quarter of a century as "symbol of oppression and failed Trump emphasized the importance of German protests worldwide for more freedom and justice. "United and fighting for a common and just cause, they risked their lives for freedom," said the US President, the developments from the fall of 1989 together. Trump quotes Goethe With his gaze from a distance, Trump explains the reasons for the change in his message with a quotation from Goethe's Faust: "Only the one who earns freedom like life, the one who deserves freedom." every day she has to conquer. " These words of, Trump literally, "influential German poetry" had the citizens of East Germany under the difficult circumstances of the GDR regime "taken to heart". Trump also congratulated the Germans for the "tremendous progress" made in reunifying and "rebuilding" East Germany, and described the Federal Republic as one of the "most valued" partners in the United States from walls, Trump could probably soon learn on the spot. At the G7 summer summit in Biarritz, he announced that he would visit Germany "very soon". Merkel pointed out that she had "many times invited the president". However, there is no date for the visit.