Menu
Home > news > "He does not know what he's doing": Haley reports intrigue against Trump 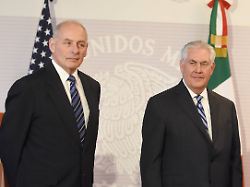 They wanted to "save the country" – in front of their own president. Former UN ambassador Haley accuses ex-US Secretary of State Tillerson and ex-chief of staff Kelly of having spun intrigues against Trump to undermine his authority. One of them pleads guilty.
Senior US officials have worked against President Donald Trump, according to former UN Ambassador Nikki Haley. Former Secretary of State Rex Tillerson and ex-chief of staff John Kelly have undermined Trump's authority in their term and want to win over it as well, writes Haley according to the Washington Post in their Tuesday's book. They had confided to her that they were "not rebellious" in opposing the president, but that they were trying to "save the country." The ex-minister and ex-chief of staff told Haley that it was not the President's decisions but their own "in the best interests of America." "The president does not know what he is doing," they said. Tillerson said people would die if Trump were not restrained. Haley had resigned as United States Ambassador to America at the turn of the year – unlike many other government officials, she was in good health. The former governor of South Carolina is said to have aspirations from the Republicans. Kelly pleads guilty The Washington Post quoted from Haley's book "With All Due Respect." In it, the former UN ambassador backs Trump's many foreign policy decisions, including the withdrawal from the international nuclear agreement with Iran and the Paris Agreement on Climate Change. But she also criticizes the US president, for example, for his embrace of Russian President Vladimir Putin at a meeting in Helsinki in 2017. In a CBS interview, Haley said on Sunday that government officials like Kelly and Tillerson were duty-bound To carry out the president's agenda. If they could not do that, they would have to resign. Ex-chief of staff Kelly left the White House at the turn of the year. His relationship with the president was last considered as broken. Tillerson had been fired by Trump in March 2018 after various disagreements – via Twitter. To the allegations Haley Tillerson did not comment. He left a request from the Washington Post unanswered. Kelly said that if it was rated as work against Trump, providing the president with "the best (…) employee advice" from the entire government so that he could make an "informed decision," he would plead guilty. ,