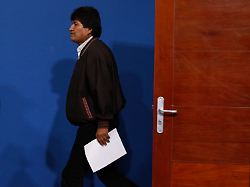 Following the protests in Bolivia and the resignation of President Morales, the Mexican foreign minister speaks of a coup – offering Bolivian government members and Morales asylum. But he sees no reason to flee.
Mexico wants to give asylum to the resigned Bolivian President Evo Morales. This was stated by Mexican Foreign Minister Marcelo Ebrard on Twitter. His country has already taken in his representation in Bolivia's La Paz 20 members of the local government and parliament. Should Morales decide to do so, Mexico would also offer him asylum, Ebrard wrote. Mexico rejects the "military operation" in Bolivia, tweeted the foreign minister. He spoke of a coup – as did the leaders of the socialist-ruled Venezuela and Cuba, Nicolás Maduro and Miguel Díaz-Canel. Alberto Fernández, who has just been elected next president of Argentina, also wrote that his country must categorically reject any kind of coup. The socialist Morales had declared himself victorious in Bolivia after the presidential election on October 20, although the opposition, as well as the Organization of American States (OAS) and the EU, had serious doubts. Since then, his supporters and opponents fought almost daily fierce clashes. On Sunday, Morales initially announced a new election after the OAS had found in a preliminary report manipulation in the election. However, the pressure on him continued to grow – also on the part of the military and the police – and finally he announced his resignation in a televised speech. He accused the opposition of conspiring against democracy. "I want the Bolivian people to know that I have no reason to flee," he tweeted. Morales also spoke of a "coup". Police have "illegally" arrested him, "violent groups" have attacked his home, Morales ruled Bolivia since 2006. Former Koka-Bauer, the 60-year-old former chief of the Andean country, was the longest-serving president in South America Although the constitution provides for re-election at most, Morales overcame this hurdle with the help of the judiciary, which described the limitation of terms as a violation of its human rights.