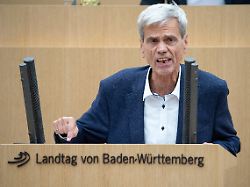 Because of allegations of anti-Semitism Wolfgang Gedeon has just survived an exclusion from the AfD. Now he wants to head the party. Before the federal convention, the 72-year-old attacks the current board.
Shortly before the federal party convention of the AfD in Braunschweig, the party-controversial Baden-Württemberg state parliament delegate Wolfgang Gedeon has now announced his candidacy for the party presidency. He announced this on the application page of the AfD. There Gedeon attacked also the federal executive committee: It would be scandalous, if this tries to steer party-internal procedure within the internal party opinion fight in his favor, wrote the 72-year-old. The Baden-Württemberg state parliament delegate Gedeon wants to be AfD chairman. (Photo: picture alliance / dpa) In his application text Gedeon also complained "an army state-paid 'anti-Semitism officer' in Germany. At the end of October, a party ruling against the state parliamentarians charged with anti-Semitism charges had once again failed. The Baden-Wuerttemberg state executive also had already sought the party exclusion against Gedeon – the state arbitration court in the southwest dismissed the request but with reference to formal reasons. Gedeon himself rejects the anti-Semitism accusations. In 2016, they temporarily led to the split in the AFD parliamentary group in the Baden-Württemberg state parliament. Gedeon currently belongs to the state parliament as a non-attached MP and triggers with his speeches again and again outrage. The AfD wants to vote at its two-day party convention, which begins on Saturday, a new federal executive. Promising candidates for the two co-chair posts are the current chairman Jörg Meuthen and the Saxon member of the Bundestag Tino Chrupalla. The field of applicants has become more confusing in the past few days. Above all, the Berlin member of parliament Gottfried Curio has the planning for the federal party congress with his short-term announced candidacy whirled around again. Curio is domestic spokesman for the AFD Group. In the election of the new fraction in September, he had unsuccessfully run for two posts. As a promising candidates for the co-chair posts of the Federal Party also apply the Lower Saxony State Dana Guth and the Member of Parliament Nicole Höchst. The co-chairman and parliamentary group leader Alexander Gauland wants to make his own decision until the party congress, if he starts again.