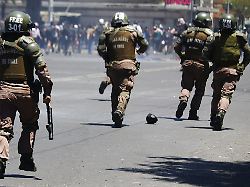 Human Rights Watch calls for a comprehensive reform of the police after violent attacks on the demonstrations in Chile. Blows and sexual assault are not uncommon there. A protester has recently lost his sight.
The human rights organization Human Rights Watch has accused the Chilean police of serious human rights violations in the 25-day protests that have been going on for weeks. Uniformed police, the Carabineros, had used "excessive force" against demonstrators and abused detainees, Human Rights Watch said. In a meeting with President Sebastián Piñera, the organization recommended a comprehensive reform of the police. The partially violent protests in Chile had begun in mid-October. They were initially directed against an increase in ticket prices in public transport. The demonstrators also criticize low wages, high education and health costs and the growing gap between rich and poor in the South American country. The protests continue to be violent, with looting and arson. Human Rights Watch has received hundreds of disturbing reports of police violence in Chile, including beatings and sexual assault. The Director of the Organization for South America, José Miguel Vivanco, said that these are not "isolated cases" or "coincidences". There is "convincing evidence" of excessive use of force and mistreatment of demonstrators and bystanders. Human Rights Watch is now proposing, among other things, better police training and internal control mechanisms. A protester completely blinded Meanwhile, it has become known that a protester injured in the protests in Chile has completely gone blind. In total, more than 200 demonstrators suffered eye injuries from rubber bullets and bullets from the police. Many of them can not see anything in one eye. On Tuesday there were protests in Chile again. Thousands of demonstrators gathered in the capital Santiago de Chile. After a peaceful start, the police used water cannons in the evening against protesters in the city center. Plundering and fires were also reported from La Serena and Iquique in northern Chile and San Antonio and Valparaíso in the center of the country.