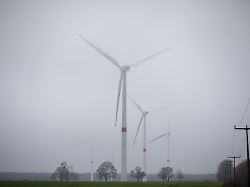 Green electricity is essential for Germany as a business location. In the implementation of two ministries argue. Corresponding advances in the field of wind power should fail, according to the SPD, especially in one person: Minister of Economics Altmaier.
The SPD in the Bundestag accuses Federal Minister of Economics Peter Altmaier to obstruct the expansion of renewable energies and thus endanger the energy supply. Anyone who, like the Federal Ministry of Economics and Technology, impedes the expansion of wind energy in particular, "puts the ax to the backbone of our energy supply," said Group Vice Matthias Miersch. "Instead of industrial policy, an industrial prevention policy is being pursued here." Green electricity at competitive prices is essential for Germany as a business location. There is currently a dispute over a bill presented by Altmaier to regulate the coal exit. In a first version, it also contained a regulation for a distance of 1000 meters between wind turbines and settlements, to the Union and SPD had agreed after long negotiations.This scheme, however, the Ministry of Economics issued more stringent than the SPD-led Ministry of the Environment, it is acceptable holds. All experts in the coal export commission were agreed that the prerequisite for the withdrawal from nuclear and coal, the expansion of renewable energy to at least 65 percent electricity share by 2030, said Mietsch. "This is the only way to ensure security of supply and the affordability of the energy supply." This Friday, leading representatives of the wind power industry and five heads of state from the north want to speak out about the future of wind energy in Berlin. Are expected Stephan Weil (SPD / Lower Saxony), Manuela Schwesig (SPD / Mecklenburg-Western Pomerania), Daniel Günther (CDU / Schleswig -Holstein), Peter Tschentscher (SPD / Hamburg) and Andreas Bovenschulte (SPD / Bremen).