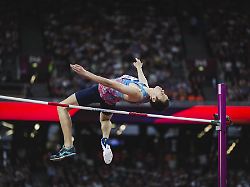 Invented doctors, fake documents: The World Athletics Federation IAAF charges the Russian Athletics Federation in the case of a high jumper serious violations of anti-doping rules. Due to an investigation impediment, the president and the director of the Russian Federation are now being blocked.
False explanations, fake documents and many unanswered questions: The obscure case of Russian world-class high jumper Danil Lysenko continues to spread and has now reached the top of the national track and field association Rusaf. The International Integrity Commission AIU of the World Federation IAAF has filed charges against Rusaf for "serious violations" of the anti-doping guidelines. Seven people, including Lysenko and Rusaf President Dimitri Schljachtin, were temporarily suspended with immediate effect. The officials are said to have hampered investigations and "not cooperated". The basis of the decision is the behavior of the persons during the investigation of possible violations of the reporting requirements of the former World Cup Second Lysenko. In addition, the accused, including Lysenko coach Yevgeny Sagorulko and Rusaf managing director Alexander Parkin, were charged on suspicion of sabotage and / or complicity. The hard steps are the result of a 15-month AIU investigation, it said in a statement. The latter concluded that "Rusaf officials were involved in procuring false declarations and forged documents" to explain Lysenko's violations of reporting requirements. Doctors who do not exist The World Federation IAAF is cracking down. (Photo: imago / Mandoga Media) Among other things, according to the newspaper "The Sunday Times" officials have tried to help the indoor world champion with illegal tricks. Thus, documents have been written that prove that Lysenko was too ill to log out properly. These documents allegedly come from doctors who do not exist at all and who are said to have worked in a fake clinic in Moscow. RUSAF spokeswoman Natalia Jucharewa emphasized in a first reaction that the barriers are provisional and would now be checked. "We received the documents only today, our lawyers are investigating the circumstances of the case and the allegations are made, the lock is provisional, the investigation continues, and the details are confidential," said Yucharewa, "otherwise nothing will ever change" Russia's athletes are since November 13, 2015 internationally blocked, but individual athletes can apply for a starter license as a neutral athletes by exemption. At the 2017 World Cup Lysenko had won the silver medal. The association will have time for an answer until December 12th. Medal candidate Lysenko had been suspended in Berlin just before the 2018 European Championships because he had not named the doping investigators his whereabouts for possible tests. The Russian sport is currently under suspicion of manipulated data in the Moscow control laboratory anyway in the criticism. The trial of the World Anti-Doping Agency (WADA) against the Russian Anti-Doping Agency Rusada is expected to be completed later this year. The sanction options extend to the exclusion of Russian athletes from major events such as the Summer Olympics in Tokyo. President of the Russian Federation, Yuri Ganus, recently called for far-reaching changes in his home country. "The old officials in ministries and sports associations have gone, otherwise nothing will change," said Ganus two weeks ago the news magazine Der Spiegel. Although there are integrity ministers, coaches and athletes, but they have hardly anything to report. Ganus had repeatedly denounced abuses in recent months, because of the criticism he would be slandered and threatened in Russia, he said.