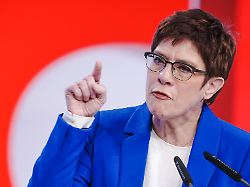 At the party congress in Leipzig, CDU leader Kramp-Karrenbauer calls on the Christian Democrats to be more cohesive. Criticism from the Union to the Federal Government was "not a successful campaign strategy". The 57-year-old indirectly appeals to her internal rival Merz.
CDU leader Annegret Kramp-Karrenbauer has indirectly criticized her rival Friedrich Merz at the Christian Democratic party convention. It should not be that the CDU, the EU-run federal government bad talk, said Kramp-Karrenbauer before the approximately 1000 delegates in Leipzig. "This is not a successful campaign strategy," she added, and received a lot of applause. Merz had called after the election defeat in Thuringia, the appearance of the Federal Government as "grottenschlecht" and made responsible especially Chancellor Angela Merkel. Kramp-Karrenbauer said of the previous reign of Merkel: "It was 14 good years for Germany, and we can all be proud of each other." The 57-year-old acknowledged that the CDU has undergone a "difficult year" since taking office – "I admit that frankly". At the same time she warned against black painting: Before the party congress was in many media reports that there was talk of a "revolution, a turmoil" in Leipzig. "We will not let us into ruin," she warned. Previously, Chancellor Angela Merkel had advised her party to unity. The CDU should "follow the motto of last year's party congress," Merkel said in her greeting. The motto at the time was: "Lead together and bring together." If the CDU sticks to it, it can also make this year's motto "become reality," said the chancellor – "Germany's strong center". She herself wanted to "continue to work as Chancellor". In her speech, the former CDU chairman hardly on party matters, but drew a balance of their governance. She recalled that she had been elected Chancellor for the first time exactly 14 years ago. "That is and remains very special for me," she said. "It was not in my wildest dreams that I imagined then that after my first election four legislative periods should follow."