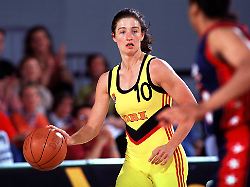 German basketball mourns for one of its best players. On Friday, Birgit Menz died after a serious illness at the age of only 52 years. The 94-times national player, active for both the GDR and the FRG, once provided for a Bundesliga curiosity.
The former German national basketball player Birgit Menz is dead. As the German Basketball Federation announced, she succumbed to a serious illness on Friday. "We are stunned and very sad, we knew that Biggi was seriously ill, but her death is still a great shock to us," said DBB President Ingo Weiss. "She was a great player and a wonderful person, we will never forget Biggi and keep her an honorable memory." She was only 52 years old. Birgit Menz, her maiden name was Eggert, played in her career a total of 94 internationals – first for the GDR and then after the turn then 70 missions in the DBB jersey. She was for many years as one of the best defenders of the DBBL, was for years Steal "Queen" and was one of the top ten players and players in the league. This is how the DBB honors her on his homepage. Particularly noteworthy is that Menz from 2005 to 2007 in Jena still played together with her two daughters Tina and Jenny in a team. Her husband Frank Menz was from 2012 to 2014 men's national coach. In the Bundesliga she was active for Wemex Berlin and BG Chemnitz, in the 2nd League for TuS Jena. Among her greatest successes were EM bronze 1997 in Hungary and participation in the 1998 World Cup in Germany. A year later she completed her last international match. But in 2013 she became World Champion with the national team Ü45 in Thessaloniki. In the final, the German team beat Russia 64:44. It was the first title of a German team at a World Basketball Championship.