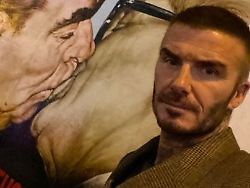 He came, posed, looked and threw off again. David Beckham has linked a publicity event in Berlin with a visit to the Wall. Photos show the former kicker during his visit to the so-called "East Side Gallery". Above all, a graffiti had apparently done it to Beckham.
The fact that David Beckham hanged the football boots long ago does not mean that he does not have enough left to do. This is evidenced by his most recent Instagram posts. Just then for a trip to Singapore, the 44-year-old came shortly afterwards for a flying visit in Berlin over. Beckham posed in front of one of the most famous graffiti on the "East Side Gallery". (Photo: Instagram / davidbeckham) According to information from the "Bild" newspaper, Beckham's stay in the German capital lasted just three hours. What originally brought him here, can also be found on the Instagram page of the former English national player: a performance for a watch brand for which Beckham acts for some time as an advertising face. But the Briton knew the duty to combine with the pleasant. Apparently, he felt the need to brush up on his history a little and a few days after the fall of the Berlin Wall to visit the remains of the former German-German border wall. So Beckham posted in his Instagram story also two pictures that take him to the so-called Show "East Side Gallery" in Berlin's Friedrichshain district. Both photos were shot in front of the cult graffiti, on which the former Soviet leader Leonid Brezhnev and the former SED general secretary Erich Honecker kiss deeply. "I could not resist a short detour to look at this famous picture," Beckham writes to one of the two shots. However, a few tourists around him should not have been terribly astonished when he jumped out of the car for his lightning visit. What they will probably remember more? The wall remains or the physical encounter with a celebrity? His trip to Berlin took only a few hours. (Photo: Instagram / davidbeckham)