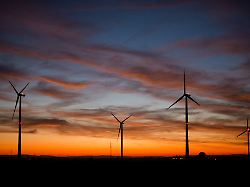 After the first wind peak in early September, the situation in the German wind energy industry has continued to deteriorate. The companies give the policy a complicity and therefore see it as their duty. But counting is missing so far.
The meeting between Federal Minister of Economics Peter Altmaier of the CDU and representatives of the wind energy industry ended on Monday evening without any tangible result. However, the talks have led to a "better understanding," said a spokesman for the Federal Wind Energy Association. In view of the slack in the expansion of wind power and impending job cuts Altmaier had invited to the second industry meeting on wind energy. In contrast to the Wind Summit at the beginning of September, only industry representatives were invited to this meeting. It was a "small circle" including representatives of individual companies, it said from the industry. It's about the situation of the companies. At the wind summit in September, representatives of the federal states and various associations were also present. Wind energy is currently in crisis, and the expansion has plummeted. The industry is making increasing demands and worsening conditions due to the policy responsible. Recently, the wind turbine manufacturer Enercon had announced tough cuts that would eliminate up to 3000 jobs in Germany. There is also strong criticism at the flat-rate minimum distance rules for wind turbines planned by the Federal Government.