Menu
Home > news > Member of a Preppergruppe: Policeman for Gun Ownership in Court 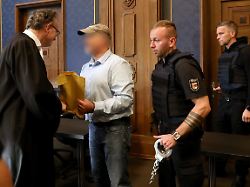 Through an Internet forum, they discuss their preparations for "Day X" – the day the state loses its monopoly on force and switches to survival mode. One of them is a policeman. Among other things, he is said to have provided ammunition and weapons – now he has to answer in court.
In front of the district court of Schwerin, the trial of a police officer has started, which privately owned large quantities of weapons, ammunition and explosive devices, some of them illegally and partly improperly kept. The prosecution accused the 49-year-old to the trial prelude, including having stolen 31,500 rounds of ammunition, various weapons, stun grenades and knives, although he had no firearms card. The Defendant Marko G. admitted the allegations. At the same time he rejected allegations that there were right-wing extremist motives in the so-called prepper group. Defendants are violating the weapons, the war weapons control law and the explosives law. G. belonged to a prep group that communicated via the Internet chat group "Nordkreuz". According to the prosecutor's office, the group wanted to prepare for a "Day X", when the state loses its monopoly on power in a crisis situation and the members have to help each other. G. is said to have advertised up to 40 members for the group. The group has collected money from which, among other things, food supplies, medicines and body bags were purchased. "One of the good guys" G. works since 1999 with the police Mecklenburg-Vorpommern. From 2004 to 2014 he was a temporary precision shooter at the special forces. He was a witness to the federal prosecutor's office in 2017, when she was investigating two other members of the Nordkreuz group on suspicion of preparing for a state-threatening act of violence. In a house search, the police found at G. large quantities of ammunition and weapons that were confiscated. Much of it lay open and was not secured against access by third parties. G. had only illegally acquired 18 rounds of ammunition because they were only handed over to police forces and armed forces. Although he no longer possessed a firearms card, investigators at G. found another 31,500 rounds of ammunition during a second search in June 2019. Among the confiscated weapons was a submachine gun that had been stolen in 1993 from an army barracks. According to the investigators, G. encouraged three other police to get ammunition for him. Against them is still determined. According to the public prosecutor G. possessed ammunition, as their "origin" or "legal receiver" the investigators various police departments in the entire federal territory and the Federal Army constituted.Leichensäcke as NässeschutzG. in a statement read out by his defense justified the possession of weapons and ammunition with his great enthusiasm for weapons. He has served his country since 1993 – "I was one of the good guys". It was with him out of sight that the gun right not only for "the bad guys", but also for him. He regrets that. The Preppergruppe had prepared for natural disasters, a comprehensive power outage and the like. Extinguishing lime was purchased for any latrines to be built. Body bags should protect sleeping bags from moisture. Politically, the members were not motivated. In the Internet chat group "Nordkreuz" was sometimes maintained a "rough, bad humor". Right tendencies in the contributions he had not noticed. "Maybe I should have looked more closely," G. explained. The prosecution had refused at the beginning of the process, in the case of a comprehensive confession to consider probation for G. This would not be appropriate given the damage the reputation of the police has taken. The process will continue on the 28th of November.