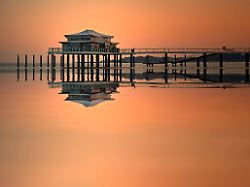 For many municipalities, the second home tax is a major source of income. The calculation, however, support several communities to outdated values ​​- therefore it is unconstitutional. There is an urgent need for action, there will not be a transitional period.
Municipalities whose second home tax statutes are unconstitutional should adopt new regulations as soon as possible. The Federal Administrative Court in Leipzig dismissed the concern of several municipalities in Lower Saxony and Schleswig-Holstein that their statutes may be further applied until a new regulation. The court has no leeway to enact a so-called continuation order, said the chairman Judge Wolfgang beer as justification. The communities Friedrichskoog, Timmendorfer beach and Lindwedel have so far collected second home tax on a basis of calculation based on data from the 1960s. The Federal Constitutional Court in Karlsruhe classified this as unlawful – analogous to its property tax ruling. Several property owners had filed a lawsuit against the second home tax. With success – their tax assessments were abolished now. In the previous instances, the dispute had originally turned to the legality of the basis of calculation. The Lower Saxony Higher Administrative Court (OVG) had still classified the scale as admissible, the OVG Schleswig, however, did not consider the link to the unit value of 1964 suitable. Before the revisions against these judgments were heard in Leipzig, the Federal Constitutional Court ruled the case this summer in principle. New statutes may be issued retroactively. The municipalities now at least hoped for a transitional period until they changed their statutes. The reason: they fear financial losses, because especially in tourism regions, the second home tax is a significant source of income. The municipality of Timmendorfer Strand is now facing repayments of 2.3 million euros, according to its lawyer. Since receiving the lawsuits, the municipality has for several years only issued advance payment decisions – and no final tax assessments. Now there is a right to a refund for the second homeowners who made the upfront payments. "Timmendorf understands this as a state of emergency," said lawyer Marcus Arndt.Dem argument, however, the Leipzig judges did not follow. "Of course we see the difficulties facing the municipalities," said judge Bier at the hearing. However, there have been indications for some years that the calculation could overturn on the basis of an "annual gross rent". "Would not the municipalities have been well advised to mentally adjust to the fact that the link to 1964 does not go on forever?" Bier asked. According to the estimation of the German Association of Towns and Municipalities, a three-figure number of municipalities levies a second home tax nationwide. However, how many municipalities have calculated the tax based on the unit values ​​of 1964 is not recorded. From the point of view of the Federal Administrative Court, the damage to the municipalities should be limited. On the one hand, new statutes are expected to be issued retroactively, on the other hand, decisions that have already become final may not be reversed.