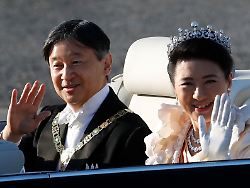 Already in May he succeeded his father, in October Japan's new emperor Naruhito was enthroned. Now he shows himself with his wife Masako in a parade through Tokyo to the people. As a vehicle, they use a specially made car worth millions.
With the cheers of tens of thousands of people, Japan's new Emperor Naruhito and his wife Empress Masako showed themselves to the people in a parade through Tokyo. The monarch in a tuxedo and his crowned wife, dressed in a light dress, waved to the red-and-white flag-waving people from the raised rear seat of their luxurious convertible. Tens of thousands of people lined the streets, waving Japanese flags. (Photo: imago images / Kyodo News) The drive in the black Nobel car body under a bright blue sky led from the palace over a 4.6-kilometer route to the imperial residence in the Akasaka district. There live the 59-year-old Naruhito and his four years younger wife Masako still until the Imperial Palace is rebuilt for her. Made-to-measure convertible for imperial couple Actually, the parade was planned on October 22 after a ceremony to enthrone the emperor, at the approximately 2000 Guests from Germany and abroad – including Federal President Frank-Walter Steinmeier – had participated. But out of respect for the victims of a devastating typhoon disaster with dozens of dead, she was postponed. Over 400 meters, the imperial column stretched out of about 50 black sedans and motorcycles. Also included were Naruhito's younger brother, Crown Prince Fumihito, and his wife, Crown Princess Kiko, as well as Japan's right-wing conservative Prime Minister Shinzo Abe.Rund 26,000 police officers were mobilized for the magnificent parade. It was another highlight in a series of succession rituals that began in May, when Naruhito succeeded his overthrown 85-year-old father Akihito. The tailor-made for the imperial couple Century Century Convertible of the largest Japanese car maker Toyota, in which the imperial couple was chauffeured by Tokyo at a slow pace, the state was estimated to cost about 800 million yen (about 6.6 million euros).