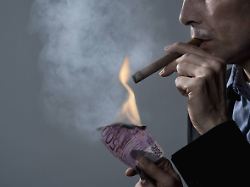 The fact that more and more financial institutions in Germany charge interest on the credit of their private customers has spread. But so far the trivialized custody charge on credit hit only wealthy people. This is now over. A Volksbank now collects from the first cent.
Until just a few weeks ago, the scenario seemed unlikely. Now the taboo break is there. Volksbank Raiffeisenbank Fürstenfeldbruck is the first bank in Germany to impose penalties of 0.5 percent on overnight deposits. And that already from 0.01 cents. So far, the so-called custody fee has been charged exclusively to credits from 100,000 euros. At the beginning of the month, this limit was dropped for the first time when the Volksbank Magdeburg had introduced a negative interest rate for overnight deposits from 75,000 euros. The Volksbank Raiffeisenbank Fürstenfeldbruck has now waived its new website since 01.10, according to its website. completely on a free allowance and passes the negative deposit rates of the European Central Bank in full. Charges for saving money are passed on This measure represents an attempt by the financial institutions to pass on the fine imposed by the European Central Bank (ECB) for saving money to customers. In addition to savings banks and Volksbanks, Commerzbank is also trying to pass on the burdens imposed on it to its private customers. Corporate customers have long had to pay high interest rates on high deposits. Consumer advocates point out that the money houses are not likely to call the burden on existing accounts. Since when the offer of the Volksbank Raiffeisenbank Fürstenfeldbruck is actually online, is so far unclear. In order to be able to introduce such custody charges in retrospect, individual agreements are necessary in the opinion of consumer advocates. An assessment that also shares Finanztip boss and n-tv expert Hermann-Josef Tenhagen. He also complains at this point, the unimaginativeness of many financial institutions, the ECB parking fees simply pass on to customers. Rather, the financial institutions should consider what is otherwise, for both sides rewarding, to begin with the savings of customers. "The model is called market economy" In principle, the imposition of a penalty interest in some cases should be problematic. The district court of Tübingen has already decided that a giro account subject to a fee may not be charged with negative interest (Ref .: 4 O 225/17). Earlier, in another ruling, the court had already forbidden Volksbank Reutlingen from charging negative interest rates on existing overnight or fixed-term accounts (ref .: 4 O 187/17). Anyway, Tenhagen has another piece of advice for sufferers: "The model is called a market economy, and if my bank tells me it does not want to pay me interest on the money I gave her as a loan, I'll go to one It is only natural for me to pay penalty interest. "But even for savers who hoard high sums on money market accounts, he finds in the interview with n-tv.de clear words:" The balance on a call money or checking account should not be 100,000 euros.This is mischief.Sums in this amount are then but long-term investment, for example, in a global equity ETF. Or maybe in a private property. "Who spares any disputes, yet a lot of money on daily, Instead of investing in time deposits or current accounts, there is still some way to distribute the money among various providers. For penalty interest on smaller assets are still not expected by experts despite the now called offer of Volksbank Raiffeisenbank Fürstenfeldbruck. Anyone who distributes his money in this way should also undermine lower allowances in the long term. In addition, with regard to the deposit insurance assets for savings should not be higher than 100,000 euros per institution anyway. This is how the account change works