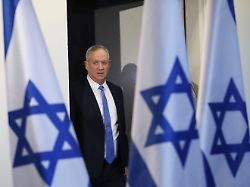 Two months after the election, Israel still has no new government. Winner Gantz makes a proposal that could bring his rival Netanyahu into political seclusion – but his own party would have to drop him for that.
Israeli opposition politician Benny Gantz called for the formation of a "broad unity government" with the right-wing conservative party of Prime Minister Benjamin Netanyahu. At the same time he urged his political rival, who is due to go to court for corruption, to resign. The Ministry of Justice had announced on Thursday evening, the ruling Prime Minister for ten years should be charged with fraud, infidelity and bribery. The allegations against Netanyahu are based on the suspicion of influencing the media, alleged crooked deals with companies and luxury gifts of friendly business people in return for political favors. It is the first time in Israel's history that an incumbent Prime Minister stands directly before an indictment. Netanyahu should respect the decisions of the Israeli legal system and the will of the majority of people, said Gantz of the Mid-Blue and White Alliance late Saturday night in Tel Aviv. After the resignation of the head of the Likud party can continue fighting for his innocence. Netanyahu should first clarify problems Gantz proposed a division of power. "I will be prime minister for the first two years," he said. During this time Netanyahu could clarify his legal problems. Should Netanyahu be acquitted, he could return to the post of head of government, Gantz said. "This is the only way to prevent a new election." Due to the complicated majority after the parliamentary election on 17 September, there is still no new government. The parties have not yet reached agreement on a coalition and have only two and a half weeks to avert a third new election within a year due to the deadlines. Government formation is difficult because neither the right-wing nor the center-left camps are over a majority. Gantz's Blue-and-White Alliance emerged as the strongest force with 33 out of 120 mandates. Netanyahu's Likud got 32 mandates. Netanyahu had already failed to form a government before Gantz, as he had in April after the previous parliamentary election. The 70-year-old has been in office since 2009 and is currently in charge of government affairs. Netanyahu recently stated that he wanted to continue serving his country as prime minister. He accused the authorities of improper work in the investigation and spoke of a "coup attempt". Netanyahu's right-wing government partners stand by him despite the corruption charges. It is unclear whether intra-party competitors could be prepared to overthrow their chairman and thus allow a way out of the situation.