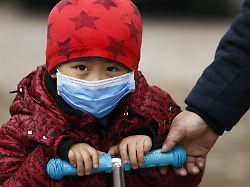 Heat waves, crop failures and malnutrition are just a few of the consequences of climate change. In a new report researchers paint a frightening picture: the health of thousands of people is at risk. Especially with children, the damage can be dramatic.
Climate change is already damaging the health of many people, especially children. In a continuing economy as before, "the life of every child born today will be profoundly affected by climate change," says the consortium The Lancet Countdown, which includes around 100 experts. Half a month before the UN Climate Change Conference in Madrid, experts from 35 institutions will be reporting such as the World Health Organization (WHO) and universities in the journal "The Lancet" the current and future effects of climate change on health. If CO2 emissions continue as before, a currently-born child will live on average in a four-degree warmer world on his 71st birthday. Children are the most affected by the effects of climate change, said Nick Watts, head of the Lancet consortium. Your body and your immune system are still developing and childhood damage may remain. Crop erosion caused by climate change and, as a result, malnutrition are also the worst, the researchers write. They suffered more from diarrhea and mosquito-borne diseases such as dengue. According to the report, nine out of ten years with the best conditions for dengue mosquitoes have existed since the year 2000. The conditions for the cholera pathogen had also improved since the early 1980s. A group of bacteria, the vibrios, is becoming an increasing danger, even in the Baltic Sea, according to the Lancet report. The pathogens can cause gastrointestinal and wound infections. Since the 1980s, due to higher water temperatures, the number of days that can be infected with vibrations in the Baltic Sea has doubled. In 2018 it was 107 days. If, on the other hand, global warming were limited to 1.5 degrees – as requested in the Paris Climate Agreement – and the promises made by the states were met, the researchers say. A child in England could experience the coal exit at the age of six, in France at the age of 21 The farewell of gasoline and diesel cars and all born today worldwide could experience with 31 years that only as much CO2 is produced, as can be absorbed by nature or by technical means. At the same time, the air could be cleaner and the infrastructure better.44,800 premature deaths in Germany "An unprecedented challenge calls for an unprecedented response and it requires the participation of 7.5 billion living people to ensure that a child born today does not succeed a changing climate is determined, "emphasize the authors. In 2018, people who are older than 65 years old experienced more heat waves in Germany than the average of the years 1986 to 2005, according to a separate statement from the Lancet team, the data for Germany summarizes. In 2016, particulate matter pollution (PM 2.5) contributed to more than 44,800 premature deaths in Germany, of which 8,000 were due to the burning of coal. Particulate matter also originates from traffic and industry. According to the report, economic losses and health costs due to particulate matter amounted to 20 billion euros. Overall, global air pollution caused seven million deaths in 2016, of which 2.9 million were particulate matter emissions. The report also shows that people in 77% of countries are increasingly struggling with forest fires and similar fires. Temperature rise and heat waves led to a loss of 133.6 billion working hours in 2018, and the number is rising. Missing view of allergiesAllergy researcher Torsten Zuberbier of the Charité in Berlin generally welcomes the report. However, there is an important aspect that also affects school performance: Climate change has increased pollen count and extended flowering. In addition, allergenic plant species such as Ambrosia in Europe continued to spread. Therefore, it is incomprehensible that the report completely ignores allergies. Sebastian Ulbert from the Fraunhofer Institute for Cell Therapy and Immunology in Leipzig said that German physicians must increasingly have mosquito-borne pathogens "on the screen". "This year, for example, most West Nile virus infections went undetected because of flu-like symptoms no one thought about this pathogen." The authors of the report formulate four key demands: a quick and complete abandonment of the world's coal flows. A guarantee that the rich states, as promised, will give the poorer 100 billion dollars in climate support annually from 2020 onwards Promote traffic and walking and cycling, something with more bike paths. Invest in health systems so they can help people damaged by global warming and not collapse.