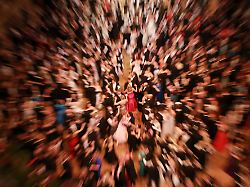 Everything waltz, it is again in Austria's capital. Those who hold their own have their ball. And because a good many hold their own, there are hundreds of events. For the metropolis, it's a million dollar business. And in the dance schools, it's been more than just the right turn to the left.
The lady extends her hand and raises it lightly so that the Lord does not have to bend down too deeply. The kiss is only hinted. The gentleman should look the lady in the eyes at the beginning and at the end, the dance teacher sharpens his pupils the attitude with the hand kiss. "If you shine the lady in the end, then you did it right." Such lessons are still part of the curriculum of the 100-year-old dance school Elmayer in Vienna. The ball season, which starts in Austria from 11th November and reaches its peak on 20 February 2020 with the glamorous opera ball, is the demand for lessons high. The 16-year-old Isabel Sereny and her 17-year-old dance partner Santiago Posada from the beginner course are full of anticipation. "I hope my skills will be enough," says the 17-year-old student. Social media but socially incompetent Isabel and Santiago learn to dance – and so much more. (Photo: picture alliance / dpa) At the height of the ball season, the participants in private and group lessons would take the buck in their hands, even to practice the obligatory left-hand roller, says Thomas Schäfer-Elmayer. Many are from Germany. The 73-year-old is well known in Austria as a juror for years on the TV format "Dancing Stars" for dance and style issues – and sees his courses as a comprehensive school. "People are learning social skills – they no longer know how to deal with other people", Schäfer-Elmayer points out to an incompetence of the more familiar with social media youth. This starts with the uncertainty of who is to greet when and end in the debate whether the door behavior for a lady is now a female undesirable form of male tutelage. Polite behavior and a certain gallantry belonged to it – and had nothing to do with male boasting, Schäfer-Elmayer criticizes. This is an expression of appreciation and respect, because the women make a huge mistake, "says the Benimm Pope. The young Isabel agrees with him. "Personally, I always like that when a boy or guy opens the door in front of me," she says. Santiago noticed that the proximity to the partner is a sensitive topic. "With the body contact, the boys had some problems," said the 17-year-old. Some were worried that it might be disrespectful to come closer to someone. The #Metoo debate seems to have arrived in the dance school too. The ball as a million dollar business Johann Strauss' son composed the Donauwalzer, which is considered the secret hymn of Vienna. In gold, the clocks for the city probably can not be outweighed. (Photo: imago / Peter Widmann) Philharmonic ball, coffee ball, sugar bakerball, the ball of the Atomic Energy Agency IAEA, Piaristenball, hunter's ball – who wants to float in Vienna on the floor, has plenty of opportunity. According to Wien Tourismus, 450 balls per year invite you to dance – from the elegant traditional ball in the Hofburg to the rather humorous Fasching party. The dress code is strictly at the opera ball. Men must wear tails. A wristwatch is considered a faux pas. "Correct is a golden pocket watch with chain," clarify the tourist as a precaution. The thrill of immersing yourself in this dance culture, reminiscent of Emperors times, is immense. The Vienna Economic Chamber estimates the number of ball visitors last season at 515,000. Approximately 140 million euros landed in the coffers of organizers, clothing stores, hairdressers, restaurants and dance schools. The Viennese love for the ball is at least 250 years old. At that time under the reformer Joseph II (1741-1790) dance festivals in the imperial Hofburg were also opened to the citizens. In the process, the waltz, which was perceived as being overly cheeky because of its peasant roots, also entered the aristocratic circles. Thanks to the compositions of the waltz family Strauss, dance experienced a boom in the 19th century. In the 20th century, the waltz in Vienna survived the fight against the contender Tango. "Here, the orchestras were booed when they played tango instead of waltz," says Elmayer. "The Viennese are unbelievably spoiled when it comes to balls." The Influence of the ParentsTo the joy of dancing has significantly contributed to its standardization. In the early 1960s, the World Dance Program (WTP) was launched. The basic steps were now taught in the same way globally, so that it no longer made such a big problem if someone went to the dance school in Tokyo, Paris or Berlin. The dance school of Schäfer-Elmayer is also a kind of casting show. For around 50 balls Elmayer and his team put together in their own words, the solemn opening deposit, in which dozens of couples as harmoniously set the first dance accents of the evening. "Without that, a Viennese ball is unthinkable," says Schäfer-Elmayer. The couples are between 16 and 28 years old. Vienna always opens with a left-hand scroll. Elmayer likes to sort couples by height. Sometimes, he admits, the influence of the parents is so great that other criteria counted. There prevails the principle that the offspring of the most prominent guests in the front row.