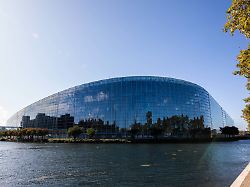 Not only the Greens, but also Liberals, Social Democrats and Conservatives want to declare the climate emergency and tighten the CO2 targets of the EU. However, the parliamentary change between Brussels and the Strasbourg location is also targeted by the climate campaigners. So far, Paris is on the brakes.
MEPs from various factions have called for the climate emergency to be declared. Representatives of the Conservatives, Social Democrats, Greens and Left signaled in support of a motion for a resolution by French Liberal Pascal Canfin at the opening of the plenary week of the European Parliament in Strasbourg. The text should be voted on Thursday. According to Canfin, the central aim is to reduce the greenhouse gas emissions of EU countries by 55 percent by 2030 compared to the reference year 1990. So far, only a reduction of 40 percent is planned. The Greens have submitted an alternative resolution calling for a reduction of 65 percent. To date, more than 1,000 administrative units worldwide (such as states, cities and municipalities) have declared a state of emergency because of the consequences of climate change, according to the European Parliament Priority declared to curb global warming. In September, the Austrian parliament passed a resolution. In Germany, 43 cities, including Cologne, Leipzig and Wiesbaden. The CDU-Europe MP Peter Liese noted that the word "state of emergency" is negatively charged in the German. He thinks of the word above all in panic and abuse of power, for example in the Third Reich, and therefore prefers the phrase "climate urgency". "If we can agree on that, we will vote here on Thursday," Liese announced. "Abolish traveling circus between Brussels and Strasbourg" Should the EU agree on an ambitious emission reduction target, this would indeed be "historic," he said Greens MP Bas Eickhout. "But then we have to continue that". Finally, actions, not just declarations, are needed, for example, by abolishing "this senseless back and forth of Parliament between Brussels and Strasbourg", the Dutchman added. Twelve times a year, the plenary sessions of the European Parliament are held for three to three four days in Strasbourg. An average of 2,500 MEPs, assistants, interpreters, staff and lobby and media representatives travel by car, train or plane from Brussels on the 430 kilometer long route to Alsace. So far, any attempt to end this "traveling circus", failed because of France's resistance. The Polish MP Yadwiga Wisniewska of the right-wing conservative group of the ECR joined Eickhout's request. Her group had previously requested an official environmental impact assessment of the ongoing removals between Parliament between Strasbourg and Brussels. However, support for a higher level of ambition in climate protection made Wisniewska dependent on increased financial support for the EU countries to phase out coal.