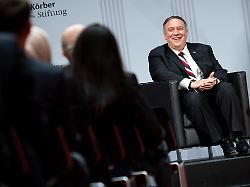 US Secretary of State Pompeo does not spare criticism during his visit to Berlin. But he wants to defend "our freedom" together with Europe, when authoritarian structures are spreading again.
"I'm in favor," interjected US Secretary of State Mike Pompeo with a grin as the presenter had not yet put her question about NATO to an end. But the American commitment to the Alliance in an appearance before the Körber Foundation in Berlin was not without demand. Once again, Pompeo called on NATO partners to become more involved. The international environment has changed so much that the transatlantic alliance must change as well. Without stronger contributions from NATO partners, the organization threatens to become "inefficient and superfluous," he said. Prior to his speech, he had met with Annegret Kramp-Karrenbauer, his German counterpart, who was about to step in with a stronger involvement in defense Finance Minister Olaf Scholz is currently in the clinch. Kramp-Karrenbauer wants to significantly increase spending on defense in the sense of NATO, Scholz denies the necessary money from the federal budget. A meeting with the Minister of Finance was on Pompeo's schedule, was a quarter of an hour. Just enough to exchange very different opinions about responsibility within the NATO alliance. In his speech, Pompeo tackled the currently most contentious issues between the US and Germany. He criticized the fact that the Federal Government is holding onto the controversial Baltic Sea pipeline Nord Stream II, which will be used to supply Russian natural gas to Germany from 2020 onwards. "We do not want the European energy supply to depend on Putin's arbitrariness," he said. "Russia – led by a former KGB officer – marching in its neighboring countries and kill opposition," said Pompeo and compared the situation for the opposition in Russia with that in the former GDR. Russian authorities in Eastern Ukraine and the occupied Crimea "with raids and torture" against the Crimean Tatars and Ukrainians who rejected the "Russian aggression," said the US Secretary of State. "In Chechnya, everyone who is considered" undesirable "by the authorities simply disappears." Pompeo criticizes Chinese methodsPompeo, former head of the CIA, again warned against involving Chinese telecom equipment supplier Huawei on the 5G network. The US accuses the company of being too close to the government and has blacklisted Huawei on suspicion of espionage. Since then, US companies have been prohibited from doing business with the Chinese network equipment supplier. In contrast, the German government announced in October that it did not want to exclude the group from setting up a 5G network in general. The EU Commission is currently asking all Member States about their position on the use of Huawei. The aim is to develop a common EU position. In the eyes of the US Secretary of State, the repressive methods of the Communist leadership in Beijing are "horribly" similar to the practices in the former GDR. "The Chinese Communist Party is harassing and overseeing activists from Xinjiang and Hong Kong who have gone into exile to Germany and elsewhere in Europe," Pompeo said. He also accused the People's Liberation Army of "intervening in the sovereignty of China's neighbors." "We must speak out when human rights violations occur in China, Myanmar, Iran, and elsewhere," Pompeo warned, calling on Europe to join Syria as well involved. The US had not withdrawn and had not left the Kurds to themselves, they supported them, he said, responding to the criticism of a questioner to reduce the US troops there. In addition to the solemn look at the fall of the Berlin Wall 30 years ago Looking at the state of the world also appropriate "sobriety," said Pompeo, who was stationed in Berlin in the eighties as a soldier. The US and its allies must together defend the values ​​gained by the fall of the Iron Curtain. "It is up to us to defend our freedom and our future, when we stand together in unity, we stand together as allies, as friends."