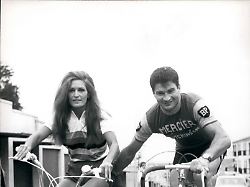 The Tour de France can never win Raymond Poulidor. Nevertheless, he is a folk hero in France. Now "Poupou" died. The death of the cycling star triggers widespread consternation in his homeland.
French cycling mourns one of its greatest heroes: Raymond Poulidor is dead. The "eternal second" of the Tour de France died in the night of Wednesday around 2 am in his home town of Saint-Leonard-de-Noblat near Limoges, like his wife Gisele of news agency AFP confirmed. "He left us this morning," she said. Poulidor was 83 years old. When the tragic news became known, it sparked a wave of sympathy. "It's a big loss, I lose a big friend," said Belgium cycling legend Eddy Merckx and spoke of "great sadness". President Emmanuel Macron also said that Poulidor would wear "the yellow jersey in the hearts of the French forever". The Tour de France said on Twitter: "He was a great champion, but much more than that. The tour will not be the same without him – we'll never forget you, Poupou!" French cyclist Romain Bardet praised Poulidor as an "icon", his French team AG2R commented: "Au revoir, Poupou." Legendary duel at the Puy de DômePoulidor, only called "Poupou" in France, scored eight podium finishes between 1962 and 1976 Tour de France, last as a 40-year-old. He has never won the race, he also never touched the yellow jersey. Nevertheless, he conquered the hearts of his compatriots by storm. In his homeland, he was almost more popular than the great Bernard Hinault. Poulidor was despite his missing Tour victory a successful racer. He won Milan-San Remo, Paris-Nice or the Tour of Spain, in addition, the good time driver and excellent climber get seven victories in tour stages. Nevertheless, Poulidor became synonymous with the tragic hero, a unlucky person against whom everything always conspired. But also for someone who did not force the fortune. Oblivious is the Ellenbogenduell with his great rival, his far less popular compatriot Jacques Anquetil, at the Puy de Dôme in the Massif Central at the 1964 Tour. Anquetil concealed his utter exhaustion and Poulidor relaxed To deceive. Too late he took the initiative, attacking and taking his rival for 42 seconds in the last 800 meters. Not enough to take on yellow. Not enough to win Anquetil out of the overall victory "I liked that everybody liked me" "Maybe I was missing the last ambition, even if I had always given everything," Poulidor once said: "But I liked it too that everybody liked me, the fans and the other drivers. " They did until last. His legacy remains unforgotten – and lives on in the peloton. His grandson, Dutchman Mathieu van der Poel, has just begun his promising career. The two-time cross-world champion made his breakthrough on the road in 2019, won in the spring, including the Amstel Gold Race. Van der Poel published a picture on Instagram showing him by his grandfather's side. "Always so proud," wrote the 24-year-old and added a broken heart. In early October, Poulidor had been hospitalized because of "great fatigue", his condition worsened, he could not leave the clinic.