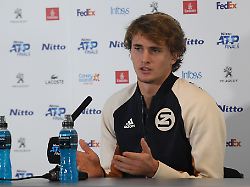 Astigmatism affects the vision of the best German tennis player, Alexander Zverev. After his retirement at the ATP Finals an operation to ensure that the 22-year-old in the future needs no contact lenses.
Germany's best tennis player Alexander Zverev wants to undergo surgery on the eyes at the end of the year. As the 22-year-old announced after his semi-final at the ATP Finals against the Austrian Dominic Thiem, he plans in December in New due to an "astigmatism", a corneal curvature, make an intervention in New York. "I had a lot of contact lens problems during the season," Zverev said. "Maybe I'll have it operated on." Previously, however, the German completed several show battles with Roger Federer in various South American countries. "These are going to be tough days, but I'm very happy about that," Zverev said. He canceled his participation in the new Davis Cup final tournament, which starts in Madrid on Monday. Zverev lost to Thiem 5: 7, 3: 6 in London on Saturday night, forcing them to retake the final of the prestigious elite tournament. In the previous year, the 22-year-old had triumphed as the third German after Boris Becker (three times) and Michael Stich (1) at the event at the end of the year and thus won the biggest title of his career so far. Thiem's ​​opponent in the final is the Greek Stefanos Tsitsipas.