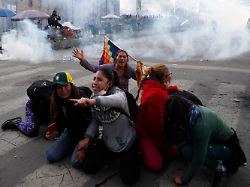 The followers of ex-President Evo Morales are unable to cope with the loss of power. They use rifles and Molotov cocktails to attack police and army forces. The recent violent protests kill five people.
In violent clashes in the center of Bolivia, five supporters of ex-president Evo Morales, who has gone into exile in Mexico, have been killed. The Inter-American Commission on Human Rights (CIDH) confirmed the five deaths and several casualties. The dead are coca farmers. The authorities said around a hundred people were arrested during the clashes. Dead were not reported. Local media reported at least eight casualties. In a suburb of Cochabamba, there had previously been serious clashes between protesters and police and army forces. Thousands of coca farmers tried to penetrate the city center 18 kilometers away to join in a protest against interim President Jeanine Áñez. However, the police prevented them by blocking a bridge. Disproportionate police violence According to police, the demonstrators were armed with "rifles, Molotov cocktails, self-made bazookas, and explosives." "They used dynamite and lethal weapons like the Mauser 765," a police representative said. "Neither the army nor the police have such caliber, I'm worried." However, the CIDH condemned the "disproportionate use of force by the police and the army" against the demonstrators. Morales resigned on Sunday after weeks of protests following the controversial presidential election in October and then exiled to Mexico. The followers of the ex-president continued their protests against the disempowerment of Morales in recent days.