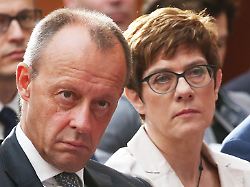 Will there be a showdown between Merz and AKK at the CDU party congress? The former rejects speculation about a fall of the current party chairman. However, in conversation with n-tv.de he leaves ambitions open for another leadership position.
The Vice-President of the CDU Economic Council, Friedrich Merz, has vehemently rejected allegations that he saw the chair of CDU leader Annegret Kramp-Karrenbauer. "I pledged to the Chair last year to help her with the difficult task she has taken on, and I do, and she also claims that help," said Merz n-tv.de. There is "no word of criticism from me about her, neither publicly nor in background circles". On the contrary, he was of the opinion that the CDU leader must for many, what goes wrong in the government, wrongly turn his head. March also made clear that he planned no coup at the CDU party conference in Leipzig at the end of November. "That's just nonsense," said Merz. "There are rumors without any substance". The party is currently in a phase of clarification and review of the issues. He himself acts with an "open visor" and simply stand up for his opinion and his convictions. Merz added: "The CDU does not overthrow its chairmen." He himself only participated as a delegate of the CDU of the Hochsauerlandkreis in the Federal Party Congress, but will actively participate in the discussion. "Leipzig is a chance for us, Leipzig has a good reputation for the CDU," said Merz. The Leipzig party congress of 2003 was a departure for the CDU after the Kohl era and for Germany in the midst of the red-green phase of weakness. "Much encouragement and request to continue" An application that the Junge Union wants to bring in at the current party congress rejects Merz Meanwhile clear: a ballot vote of the party members on the future Chancellor candidate of the Union. "Primary elections are not a suitable instrument for us in personnel decisions," Merz told n-tv.de. The experiences of the SPD and also the state of the CDU in Baden-Wuerttemberg are admonishing examples, why a primordial election is not to be recommended. At the same time the 63-year-old explained that he understood the Young Union and its demand for more participation of the party base. That's why he considers "the process of the year 2018, when we elected a new party leader via grassroots regional conferences with a final congressional decision, also for the best". The regional conferences in 2018 would have done the party very well overall, said Merz. "We should build on that again." Only then can the CDU People's Party remain and be eligible for large parts of the population. "And that's why last year is for me a model for the future, in important issues and also in future personnel decisions." Such a procedure with several regional conferences before a vote at a CDU party congress on a chancellor candidate would allow Merz back into the race for the candidacy. Whether he would make use of it, Merz left open. "There is currently no reason for me to deal with this question." Nevertheless, he feels "a lot of encouragement and the call to continue". But first of all, it was important, together with the CSU, to spread a "perspective of optimism and optimism," Merz said, adding: "If I can help with this departure, then I want to do it." The entire interview with Friedrich Merz will be released on Friday at 6pm on n-tv.de.