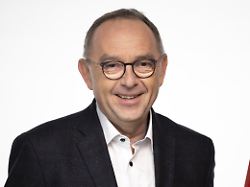 Together with Saskia Esken Norbert Walter-Borjans wants to lead the SPD. In the early start of n-tv, the former NRW finance minister calls for massive investments from the German government. Otherwise it would be necessary to talk about the meaning of staying in GroKo.
The candidate for the SPD presidency Norbert Walter Borjans makes clear demands for the continuance of the grand coalition. Although he agrees with the mid-term review, from his point of view it now depends on what can still be achieved by 2021 with the Union. "We are at a time when the economy is getting a bit gloomy and now we have to make clear just how important massive government investment is, how important it is to relieve local communities, and how important it is for us to be divisive Bringing society together again, "said Borjans in the n-tv early start. The further divergence between rich and poor would not be worthy of an industrialized country like Germany. It was decisive that investments were made. "If investment is made properly and we do not want to leave our children with debts in the sense of dilapidated roads, broken schools, a dramatically poor supply of mobile and internet, then we have to invest, but that also means that in case of doubt we have this monstrance have to sacrifice black zero. " There are debts and loans that are worth it, because it creates something that prevents other forms of debt in the future, said Walter Borjans. Skepticism in content similarities Walter-Borjans is skeptical about the continuation of the Grand Coalition. "Saskia Esken said that because of these substantive issues, she does not see the perspective that this should be done for another two years and wait two years before the substantive issues that we believe are right can be realized, and so can I. even share this skepticism. " However, he always opposed the question "GroKo – yes or no?" to make a question to themselves. The Grand Coalition has implemented many SPD projects from Walter-Borjans' view in the first two years. However, the coalition partner has always taken care "that the burdens involved are less in the upper end of wealth and income than in the middle or below, and that is one point we need to talk about," he said former NRW-Minister of Finance.Update of the coalition agreement required If you go to the congress, it will be a lively discussion. Then it's about content and the question, "if the coalition partner would lock themselves in about massive investing or a piece of necessary reworking of the climate package, that would be a point where you could say: Well, let's tell people that and then it will be better in 2021. Or we can not afford this waiting. "" I see that on the side of CDU and CSU Carsten Linnemann speaks of a necessary update of the coalition agreement and I think the right he has we have that, too. " There are things, Walter-Borjans says, "they're coming up in the next few years, and they were not seen that way two years ago." If the economy is now a bit weaker, there is already a need for action from an economic point of view, which should not wait until 2021.