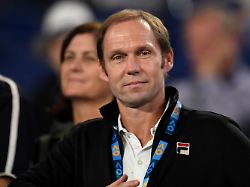 The former tennis pro Rainer Schüttler will be coaching the DTB ladies from 2020 and should bring the players back on the road to success. Most recently, he had trained until July 2019 Angelique Kerber. Soon the two meet again.
The 2003 Australian Open finalist succeeds Jens Gerlach, who has joined Julia Görges as a tour coach. Schüttler receives a contract for 2020 and will be the first time in qualifying on 7./8. February in Brazil sitting on the German bank. "Rainer brings all the experience that a good team leader needs," said long-time team principal Barbara Rittner, Head of Women's Tennis at the DTB since 2017: "His professional and human skills are undisputed, and I'm delighted that we have him for this important Could win position. " Also Schüttler looks forward to the new task with much anticipation. "It's a big challenge," said the family man, who lives with his wife Jovana and son Noah on Lake Zurich: "It's great to be back in a team competition." He takes on a "very good team with exceptional players, and I hope that together we will have much success." Shaker managed in his successful career to number five in the world rankings. For ten years he played in the Davis Cup for Germany, together with Nicolas Kiefer, he won at the 2004 Olympic Games in Athens silver in doubles. Even after his resignation Schüttler remained true to tennis. For several years he is tournament director in Geneva. Most recently, he coached former world number one Angelique Kerber, from whom he split in July of this year by mutual agreement.