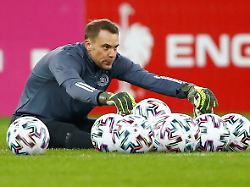 Manuel Neuer wants to make the decision about a possible DFB resignation after the European Championship in 2020 yet. So far he has not set a deadline. Especially his rival in the DFB goal Marc-André ter Stegen will probably listen carefully to this statement.
Captain Manuel Neuer still has not made a decision to continue his career in the German national football team after the European Championship finals in 2020. "I have not set a deadline, something like this has to come from within," said the 33-year-old goalkeeper of the German champion Bayern München in an interview with the Internet portal Sportbuzzer. A few months before the European Championship tournament Neuer sees apparently little reason for a resignation from the team of national coach Joachim Loew. "I know I'm in the last quarter of my career but I want to play as long as I'm fit, needed and fun, that's all the case," the 2014 World Champion said Neuer? His decision will be weighed by Neuer, who was last placed by Löw until further notice as number one. "I have only one career and can not say suddenly at 45: 'I want to play for Germany again.' There would be no step back for me, and when it's over, it's over. " Already at the 2018 World Cup tournament in Russia, the keeper had left open a participation in the next World Cup finals in 2022 in Qatar. He does not know whether he will still be there, Neuer said at the time. Especially Marc-André ter Stegen will listen closely to these new statements, as he is still traded as a potential competitor and successor to the goalkeeper for the national team. In September, according to statements by ter Stegen on his role as challenger, there had been public discussions about the number 1 in the German goal for days. Other DFB candidates are Bernd Leno from Arsenal FC and the currently injured Kevin Trapp from Eintracht Frankfurt. As a man of the future, Alexander Nübel is considered by Schalke 04, who has not yet been appointed to the A team.